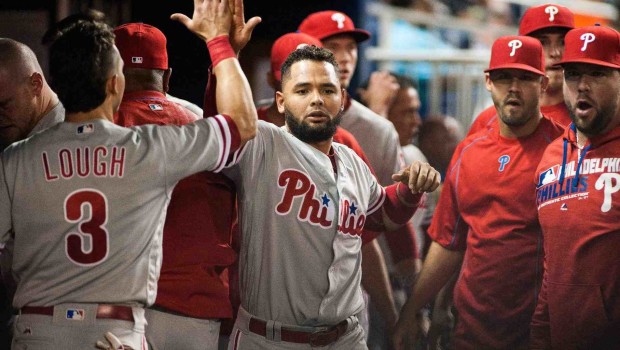 Andres Blanco’s double in a 12-pitch at-bat sparked the Phillies to a three-run eighth inning and a 4-3 win over the Miami Marlins last night.

”I got lucky I think, a lot of foul balls, good pitches,” Blanco said. ”He threw a lot of good ones and I was about to throw my bat, foul it off and stay alive. When you’re fouling off that many pitches you pass a message. Everybody wants to do it, too. Everybody tried to keep it going. And finally, we got the run that we really needed.”

”They say most close games are lost by one team not won necessarily won by the other team,” Phillies manager Pete Mackanin said. ”It was a little of both. That really helped us.”

Brett Oberholtzer (2-0) pitched a scoreless inning for the win. Jeanmar Gomez tossed a perfect ninth for his 10th save in 11 chances.

Marcell Ozuna and Justin Bour homered for Miami, which had won four in a row.

”Coming in and knowing this team is as hot as anybody in baseball, the way they swung the bat (Friday) night it was a little daunting to win this game, the way the guys battled back,” Mackanin said.

Marlins right-hander Tom Koehler struck out a season-high eight over seven innings and exited with a 3-1 lead. He allowed two hits and walked two.

”Honestly just tried to do everything that I had been doing and tried to get back to attacking the zone, getting into a good rhythm, work the game plan, and not try to get four outs with one pitch,” Koehler said.

Herrera and Cesar Hernandez hit consecutive RBI singles offCraig Breslow (0-2) with one out in the eighth, tying it at 3.

Herrera has reached base safely in nine consecutive games against the Marlins and 20 of 21 career games. He is hitting .385 (25 of 65) in his career against Miami.