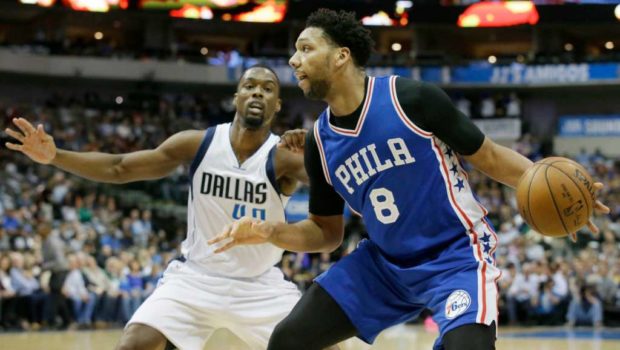 Sixers big boss Bryan Colangelo has perfected the art of speaking publicly and saying nothing:

“We’ve got three talented bigs,” Colangelo said yesterday on 97.5 the Fanatic. “They all feel that they deserve to be looked at as a potential starter and be paid as a starter. The phones have been ringing. There has been a lot of conversations. There’s been some activity. Quite a bit actually in recent weeks. It’s not something that’s just come up in recent weeks because it’s something we’ve been looking to address since I got here.

“I’ve always said that I’m looking to make a good deal for this organization. Not a bad deal. At some point, something’s got to give and we probably have to move in a different direction.”

Because Noel — who is averaging 8.0 points and 4.8 rebounds this season — is due to be a restricted free agent this summer, his situation is likely much more pressing because the Sixers must decide if he fits the team’s core, he would be willing to take a diminished role and if he is worthy of a max-contract.

“I even see value in the fact that Nerlens Noel is a restricted free agent,” Colangelo said. “We control the market, there. Someone else might drive the market, but we control the decision-making process behind it.”

Meanwhile, Jahlil Okafor has become essentially a reserve for the Sixers this season and is averaging 11.8 points and 4.9 rebounds in 23.2 minutes per game.

“I’ve said from the very beginning that I’m going to be very patient,” Colangelo said. “As we build this team. Clearly you don’t want to get to a point where you lose value in something. But, I see value in everything.”