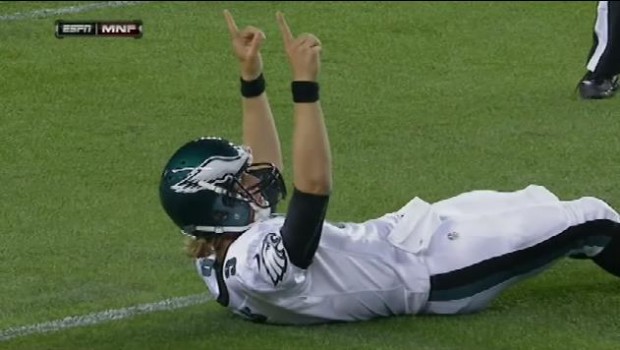 BISSINGER SPIKES THE BALL IN THE END ZONE ON EAGLES’ FOLES

Buzz Bissinger had the chance few journalists ever get — claim victory and depart the field.

But instead, he did a victory dance and spiked the football on Nick Foles’ prostrate body. Bissinger, author of Friday Night Lights, perhaps the greatest sports book written since Fred Exley’s A Fan’s Notes, took a lot of criticism for his Philly mag profile on Nick Foles, in which he questioned just how good the Eagles quarterback really was.

Now, as Foles has struggled through the first five games of the season and leads the NFL in turnovers, Bissinger says he is owed an apology.

“I got negative feedback from everyone,” Bissinger said during an 94 WIP on Monday morning. “I do feel vindicated. I’m owed an apology from the entire city.”

In the piece, Bissinger wrote that because Foles has a timid personality, he would never be successful in the NFL. Through five games, Bissinger said he has seen nothing to change his mind.

“He’s a nice kid,” Bissinger said. “But if we think we are seeing a Super Bowl caliber quarterback, we’re out of our minds.”

“He has got a timid personality, and anyone who thinks that doesn’t spill over into how you play the game is ridiculous. Look at the way he’s playing now — he’s got no confidence. There is no zip on the way he throws. He is throwing off of his back foot.”

Whether or not his poor play is because of confidence or not is unknown, but there is no denying Foles has struggled. Foles has consistently missed open receivers throughout the season, under throwing some and overthrowing others.

Despite the struggles from both him and his receivers, Foles has kept his cool. It is something his teammates, such as running back LeSean McCoy, have said they liked.

“When (receiver Riley) Cooper dropped that pass early (against the St. Louis Rams), a quarterback should get in his face and say you gotta make those plays,” Bissinger said. “He will not do that. He does not have that. Whether it’s humor, whether it’s edge, anger — he doesn’t have it.”

One of the biggest criticisms of Bissinger’s story over this past summer was that Foles was not interviewed for the piece. Foles said after the story came out that he decided not to be interviewed in it because he didn’t want the attention, something Bissinger said was a big mistake.

“Now would there be a cover story in Philadelphia magazine about Nick Foles? No,” Bissinger said. “That ship has sailed.”

Bissinger saved perhaps his harshest criticism of Foles until the end of interview, saying things will never change.

“He’s a chicken,” Bissinger said. “He has a very timid, not aggressive personality…..It doesn’t work. His personality is not going to change. That part will not change. Personality reflects everything you do in life. They go hand in hand.”