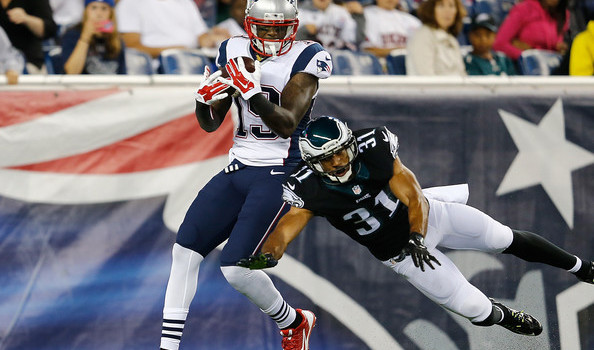 BIRDS' WOEFUL DEFENSE HAS TO GET BETTER — RIGHT?????

The Eagles’ defense was so bad Friday night that Patriots quarterback Tom Brady, who completed 8 of 10 passes for 81 yards and a touchdown along with an interception, had the worst passer rating of the six quarterbacks who played – and his was a solid 94.2!

The Eagles have allowed 76 points in two games, an average of 483.5 yards in each game, and opponents have converted 62.5 percent of their third-down opportunities.

Cornerback Curtis Marsh, who allowed three touchdowns (getting beat in photo above) and committed pass interference and holding penalties, took the prize for woeful play. The Eagles have also committed 19 penalties in two games.

“I’d be lying if I said it wasn’t a concern,” Eagles cornerback Cary Williams said. “We want to shore that up, but you’ve also got to take into consideration that we’re not showing everything that we’ve got. … It’s preseason, we’re not trying to show everything to everybody.”

Or, as outside linebacker Trent Cole put it: “You can’t tell until you’ve got a set No. 1 [unit] and it’s opening day and it’s time to go.”

• Eagles quarterback Nick Foles said he was “sick to my stomach” after his two interceptions in 13 snaps in the first preseason game against the Bears, while rookie wide receiver Jordan Matthews had three dropped passes.

Both were much better against the Patriots. Foles completed 8 of 10 passes for 81 yards and a touchdown, while Matthews had nine receptions for 104 yards.

As for Matthews, his performance against the Bears was explained away as opening-night jitters.

“The Jordan we’ve seen in practice is the Jordan you saw [Friday],” Eagles coach Chip Kelly said. “He’s such an emotional guy and plays at such a high level that I think he was just ramped up a little bit too much in the Chicago game. So I’m glad with what we saw [Friday].”

• As good as Foles was, backup Mark Sanchez was even better. In two games, Sanchez has completed 18 of 22 passes for 196 yards. He was 11-for-12 for 117 yards and two touchdowns Friday. His only incompletion was an interception.

“You’ve got to have a sense of humor about it.”

“I love that there’s no time to worry about anything with this offense,” Sanchez said. “You just roll. You get it back the next time if you miss a throw. You screw something up and you move on. There’s no time to wait and go back to the huddle and think about it, [or] you’ve got the coach yelling in your ear. It’s just not like that. You move on and you play. I love that tempo.”

• The Eagles brought in undrafted free agent Carey Spear to challenge field goal kicker Alex Henery in training camp. But it hasn’t been much of a challenge as Henery has been much more accurate.

Still, Kelly said it was a concern when Henery missed a 47-yard field goal Friday.

“You’ve got to make 47-yarders in this league,” Kelly said, before adding: “I’m confident in Alex, but again, we’ve got to convert in games, too. I’ve been real excited with him in practice.”