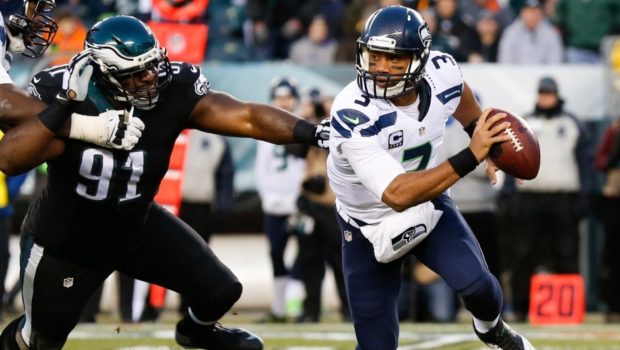 BIRDS’ SEEDING FOR PLAYOFFS ON LINE SUNDAY NIGHT IN SEATTLE!

NBC’s “Sunday Night Football” features a battle of NFC heavyweights, as Carson Wentz and the NFL-best Eagles (10-1) travel to Seattle to face Russell Wilson and the Seahawks (7-4).

Coverage begins with “Football Night in America” at 7 p.m. ET.

This game will play a pivotal role in determining NFC playoff seeding with just five weeks remaining in the regular season.

The Eagles currently hold the No. 1 seed with three conference games remaining, including a Week 14 showdown with the Los Angeles Rams (8-3). The Seahawks sit behind Atlanta (7-4) for the second wild card spot in the NFC. The Falcons defeated Seattle in Week 11.

The Birds carry a nine-game winning streak into Seattle following a 31-3 win over Chicago last Sunday. Wentz has thrown for 2,657 yards, a league-high 28 touchdowns and five interceptions. He is the third quarterback in NFL history to have thrown for 28 touchdowns and no more than five interceptions through 11 games, joining Tom Brady and Aaron Rodgers.

The Eagles have also won their past three games by more than 28 points – a first in franchise history.

Seattle responded from its Week 11 loss to Atlanta with a 24-13 win over the San Francisco 49ers. Over the past five seasons, Seattle (19-5) owns the best record in the final month of the regular season, which also includes regular-season games played in January. With the victory, Wilson improved to 23-4 in his career in games following an in-season loss, the best record by a starting quarterback in that category since the 1970 merger.

The Seahawks are one of five teams in the NFL to rank in the top 10 in both offense (eighth) and defense (eighth). Bobby Wagner ranks first among all linebackers with a grade of 98.5 and has missed just one tackle all season (fewest in NFL), according to “Pro Football Focus.”

Sunday’s game marks the 16th game between the two franchises and the first time they will meet on NBC’s “Sunday Night Football.” Seattle holds the edge in the all-time series, 8-7, and has won the last three games.