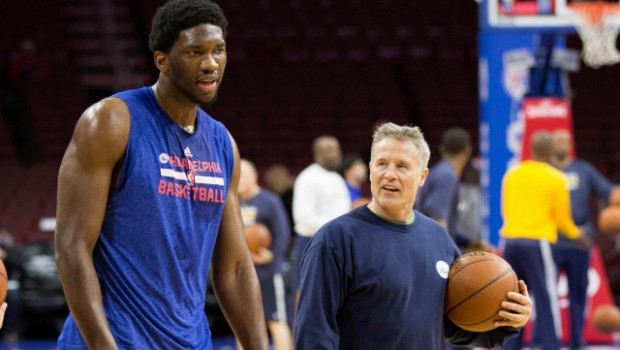 BILLY C.: NO. 1 DRAFT PICK IS EXCITING BUT EMBIID IS THE KEY!

There is no greater Sixer in terms of the thread between the 1967 and 1983 NBA championship teams than:

So when Billy C., who was back in town for the unveiling of an historical marker that honors the late, great Harvey Pollack, talks, we listen:

“You get excited about it [the No. 1 draft pick], but you’ve really got to do a lot of homework to come to decisions,” Cunningham told the Daily News. “You can’t be influenced by the outside or by what writers or fans are telling you what to do.

“Listen, I tip my hat that (Sam) Hinkie had the patience, and he deserves a little credit to have them in this position,” he said, referring to the former general manager. “This was his dream, and this was the picture he had. Would I have been able to do it? No, I wouldn’t have had the patience, personally, to sit there (during the team’s extended period of losing).

“(Brett) Brown is unbelievable, to have a smile and have that attitude that he brought to every practice. He’s a special man, and I’m so glad that he’s going to get an opportunity to possibly have some real talent, to have some free agents come in and just be excited that ‘We can win this game,’ instead of looking for a good performance.

“Let’s just hope they can bring some life back to the Sixers here. I think just seeing the amount of people that were at Xfinity Live! (on draft lottery night), it appears from that that the game is as hot as ever in Philadelphia, going back to the (Allen) Iverson years, when it was where he would pack that house. I think there is going to be a great deal of pressure and responsibility on whoever is drafted to step in here and take this team to another level. But people have to understand. These kids are 18, 19 years old we’re talking about. The only kid that’s a four-year grad that’s up in the top level is the kid from Oklahoma (Buddy Hield). Other than that, you’re dealing with kids, and you just don’t know. There’s going to be a lot of trades, I would think, because there are a lot of similarities that they have with big men and everything else.