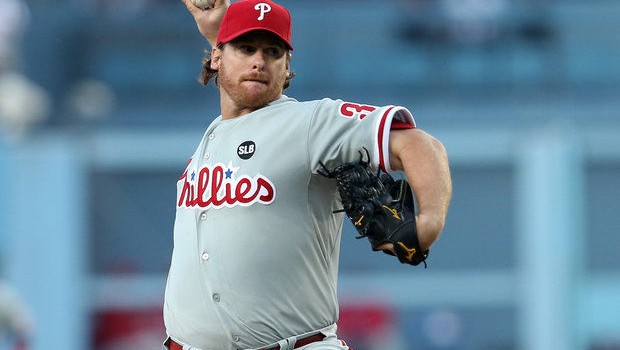 Phillies fans should not have been shocked that Chad Billingsley treated last night’s game at Dodger Stadium as a homecoming.

There was Vin Scully in the broadcast booth and organist Nancy Bea Hefley inspiring the crowd.

Except he was wearing a road uniform.

”It’s been a long road. I was pretty excited to be back out there,” Billingsley said. ”There were a lot of emotions. My whole time with the Dodgers was special. When you hear the word ‘Dodgers,’ it’s prideful. And when you’re on the other side, you realize, ‘Man, it was something special to wear the Dodger uniform.”’

Billingsley (1-2) allowed two runs and six hits in six innings in just his third start in 25 months to earn his first victory since April 10, 2013. The right-hander struck out three and walked one on the same mound where he pitched eight seasons and won 81 games for the Dodgers before undergoing a pair of right elbow surgeries.

”You like to see them do well, just not necessarily against your club,” Dodgers manager Don Mattingly said.

The Dodgers declined to pick up Billingsley’s option last October, and he signed a one-year deal with the Phillies in January.

”There were times when I thought I would never pitch again, and I didn’t know how my arm was going to feel once I got back to throwing,” he said. ”But here I am. I’m a baseball player again, and I haven’t done that a whole lot.”

Billingsley reached on a fielder’s choice in the sixth and ended up at second base, where he talked to former Phillies star Jimmy Rollins, who helped the Dodgers win 10-7 Monday night in the series opener.

”He said, ‘Man, it’s weird seeing you in a Phillies uniform, and vice versa,”’ Billingsley said. ”But it was fun.”

Billingsley lost his first start 9-0 on May 5 and went back on the disabled list two weeks later because of a strained right shoulder. He struggled in his return last week against Milwaukee, giving up seven runs and 10 hits in five innings but avoided the loss.

”I’m still kicking off the rust, but the main thing for me is just to go out there every fifth day and get in a routine,” he said.

Billingsley was steady and got staked to a 4-0 lead in the third.Jeff Francoeurdoubled in Maikel Franco, who drew a leadoff walk and Darin Ruf, who singled, and then scored on Domonic Brown’s RBI groundout to second base.

”That was the kind of performance we were hoping to get out of Billingsley,” Phillies interim manager Pete Mackanin said.

Anderson gave up a season-high-tying four runs – three earned – and six hits in five innings, struck out five and walked two in his first career start against the Phillies that was shortened because the Dodgers needed some offense.

”You see the need to try and score some runs but it didn’t work out,” Anderson said about leaving early.

The left-hander had been 3-0 with a 1.35 ERA in his three previous starts. Like Billingsley, Anderson had been resurgent after enduring Tommy John surgery in 2011 and foot, finger and back injuries.

Ben Revere added a two-run single in the sixth and Francoeur homered in the seventh for a 7-2 lead.

The Dodgers’ lone runs came on Yasmani Grandal’s two-run homer in the sixth.