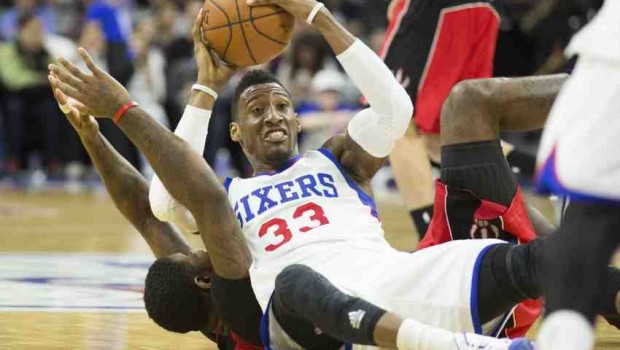 One of the bright spots in an otherwise dismal Sixers season has been the play of 6-9 soph Robert Covington, who has been the team’s best three-point shooter and has developed a complete game that promises to improve with more experience.

Covington scored 19 points, Michael Carter-Williams had 14 points and 10 assists, and the Sixers snapped a six-game losing streak with an 89-69 win over the Detroit Pistons on Wednesday night at the Wells.

JaKarr Sampson had 13 points and Luc Mbah a Moute added 12 for the Sixers (9-37). Carter-Williams, back after missing the Sixers’ last game due to an upper respiratory infection, finished one rebound shy of a triple-double.

Greg Monroe led the Pistons (17-30) with 20 points, and Jodie Meeks scored 19 off the bench. Detroit shot just 2 of 20 from 3-point range in a matchup of slumping squads missing their top scorers.

The Pistons have lost four straight, and three since leading scorer Brandon Jennings ruptured his left Achilles in a 101-86 loss to Milwaukee on Saturday. Before Jennings’ season-ending injury, Detroit had won 12 of 15 behind the play of their star point guard.

Sixers guard Tony Wroten, who partially tore his ACL two weeks ago, said before the game that he plans to have knee surgery and will likely miss the remainder of the season. But playing their ninth straight game without their leading scorer, the Sixers held a comfortable lead throughout against the equally short-handed Pistons.

Detroit tried to mount a comeback in the third quarter, slicing Philly’s lead to 59-50 on five straight points from Jonas Jerebko. But Carter-Williams drained a big 3-pointer before Jerebko was posterized on a highlight-reel jam from Jerami Grant.

The Pistons cut it to nine twice more early in the fourth quarter, but that was as close as they would come as the Sixers closed on a 17-6 run.

The Sixers took control early, going on an 18-0 run to take a 24-4 lead with 5:39 left in the first quarter. Rookie K.J. McDaniels capped the spurt by picking off an errant Anthony Tolliver pass and coasting uncontested down the floor for a thunderous dunk.