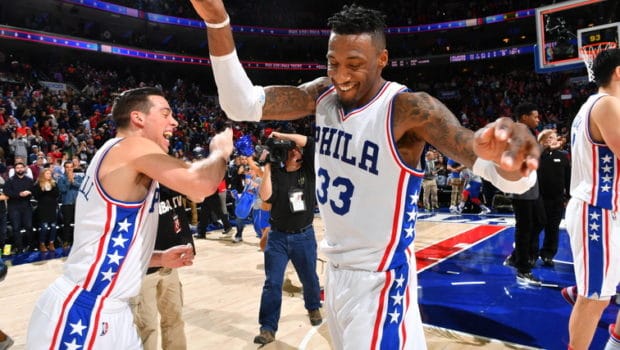 It’s been a long time since the Sixers’ Big Shot Bob has lived up to his nickname.

But he sure did last night at the Wells!

Robert Covington made a fadeaaway shot with 0.2 seconds left to give the 76ers a 93-91 victory over the Timberwolves.

“We’ve been working on that for a long time,” said Joel Embiid, whose screen after an in-bounds pass set up the game-winner.

Embiid set the high screen on Andrew Wiggins that helped free Covington for the acrobatic winner. Dario Saric hit Covington, who had been booed most of the game, for the decisive bucket.

The Sixers needed the late basket after they blew a 26-point lead and seemed headed to overtime. Ricky Rubio, just a 26 percent 3-point shooter, buried one with 1.6 seconds left that tied it at 91.

Covington, who missed all 11 shots last week at Utah, was booed after he airballed an early 3 and the fans never stopped as each shot clanked off the rim.

“I’m never going to give in to what others say about me,” Covington said.

Embiid, who led the Sixers with 25 points, again showed that the NBA’s top rookie just might play on one of the league’s worst teams. Embiid has won over Philly with his humor on social media and colorful quotes as he chases A-list celebrities for potential dates.

Embiid waved his arms and encouraged fans to get louder when they chanted his nickname “The Process,” and he later baited Karl-Anthony Towns into a technical foul.

When the Sixers’ 26-point lead was whittled to 11 late in the third quarter, Embiid made a steal and fed Nik Stauskas for a 3-pointer that seemed to steady the offense.

“(Embiid) feels like this is his program,” coach Brett Brown said.

Embiid had fans going wild in the second quarter. He pump-faked at the 3-point line, drove the lane and dished to Nerlens Noel on his right. Noel hit him back for a shot and was fouled.

Towns airballed a 3 during a Minnesota run in the third, and Embiid was quick to pounce. Towns cursed near a referee as Embiid gleefully egged him on for the technical.

Embiid, naturally, made the free throw.

He stripped former Kansas teammate Wiggins later in the quarter and hit Stauskas for the 3. Embiid’s dunk over Towns late in the fourth made it 88-80, and he flexed his muscle a bit and cupped his hand to his ear to hear the crowd like Allen Iverson.

The Sixers have struggled with which natural center to pair with Embiid. Jahlil Okafor sat out the first quarter and Noel was benched for the third as the Sixers try to find the right big man to match with Embiid for the long haul.