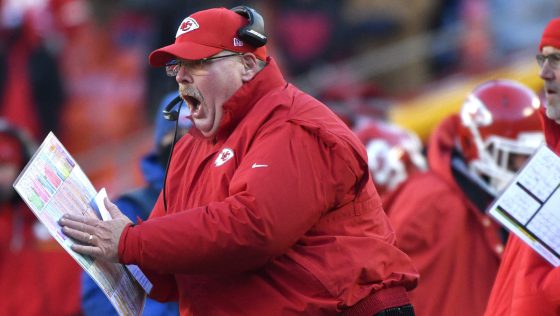 Bill Belichick and Andy Reid have 456 career regular-season wins between them, the most combined coaching wins in a single NFL game.

But today’s AFC title game between Reid’s Chiefs and Belichick’s Pats means just a bit more for Reid from a historical standpoint.

Belichick already has the five Super Bowl rings and eight appearances as a head coach.

Reid is known mostly for his inability to win the big game, and for shaky clock management. Reid, now in his 20th season as a head coach (and sixth in Kansas City), has never led a team to a Super Bowl victory, and is just 1-4 in conference championship games.

“Success to me is winning the ultimate game,” former NFL cornerback Asante Samuel, who played for Belichick in New England and Reid in Philly, told the Boston Globe. “I don’t know how you consider that success, just because you win a lot of games.”

But Reid, who turns 61 in March, has a lot of people inside the NFL rooting for him — not necessarily because people want him to beat Belichick and the Patriots, but because Reid is too good of a coach not to have won a Super Bowl.

“It eats away at him. It ate away at all of us that were there,” said former Eagles president Joe Banner, who hired Reid in Philadelphia in 1999 and spent 14 seasons with him. “Andy is a widely liked, widely respected guy that has come close many times. A lot of people in sports and in life relate to the struggle of coming close and not quite getting there and the joy of finally getting there.

“He is, in an odd way, almost the underdog that everyone is rooting for despite all his success when it comes to finishing it off and winning a Super Bowl.”

Reid may not have a better chance at winning a Super Bowl than he does this year. He has the No. 1 team, the No. 1 offense, and the likely MVP in Patrick Mahomes. The Chiefs are hosting the AFC Championship game for the first time.

“It’s not about me,” Reid said Wednesday. “Whatever happens, happens. I’m good with that. I love doing what I’m doing.”

Reid isn’t often mentioned in the same breath with the all-time great coaches. He is most remembered for his Eagles plodding down the field at the end of Super Bowl XXXIX, wasting too much time trying to come back against the Patriots. Or as a bad big-game coach who is only 12-13 in the postseason, including three straight losses in the NFC Championship game. Without a Super Bowl title, Reid is the equal to Marty Schottenheimer, who is seventh all-time in wins but will never sniff the Hall of Fame because he never won a championship.

But Banner said that knocking Reid’s bona fides as a coach is ridiculous.

“We had a stretch where we went to five championship games in eight years,” Banner said. “Obviously it doesn’t match the Patriots’ eight in a row, but that’s a historically significant accomplishment. And you can’t do that without winning a ton of big games.”

Reid’s regular-season résumé is impressive. He is 195-124-1 (.611 win percentage), making the playoffs 14 times in 20 years. He has had only three losing seasons, none with the Chiefs. He was the 2002 Coach of the Year, and has won nine division titles, including three in a row in Kansas City.

Reid has 23 more regular-season wins than Bill Parcells, in just one more season. He has 25 more than Tom Coughlin in the same time frame.

Reid also has a big fan in Belichick.

“Andy’s teams are always tough, well-disciplined,” said Belichick. “They don’t make a lot of mistakes. They make you beat them, and that’s hard to do, because they’re sound and he gets good players and he coaches them well and they’re tough.

“They were good in Philadelphia, and he went out to Kansas City and they became good there right away. They’ve dominated their division.”

Samuel, one of the few players who played for both Belichick and Reid, said they have completely different styles.

“His players love to play for him. I loved to play for him,” Samuel said. “Belichick, he has more discipline, stricter rules, things to follow, harsher punishments for certain situations, whereas Andy Reid is different. It’s not that strict of rules. You got to do something over the top to get into trouble.”

Samuel was taken aback by Reid’s hands-off approach when he signed with the Eagles in 2008.

“It was weird for me for a little while,” he said. “I’d been to his office numerous times, and he was asking me to help him out with the discipline. That’s when I found out that it was pretty much left up to me and the leaders to discipline the team. That kind of shocked me, too.”

Banner said that Reid, despite being more laid back, can be just as demanding of players and coaches as Belichick is.

“Andy’s actually pretty intense, but sort of in a low-key way,” he said. “Doesn’t wear it on his shoulder at all. If you weren’t a hard worker naturally, if you weren’t committed to winning and preparing, you wouldn’t be around long.

“It was less overt than Bill may be, but he was not willing to put up with much in terms of high-maintenance guys. Some of the guys that Bill brought in that turned out to be good choices, I don’t know if Andy would have given them a chance.”

Reid built a long-term winner in Philadelphia, and did it right away in Kansas City. The Chiefs went from 2-14 before Reid to 11-5 in his first year.

Reid also has one of the more impressive coaching trees. John Harbaugh, Ron Rivera, Doug Pederson, Matt Nagy, and Sean McDermott are among the 10 former Reid assistants who have gone on to become head coaches.

“Your ability to surround yourself, create a coaching tree, have a successful staff, manage the individuals correctly, I think that’s just a huge advantage,” Banner said. “I’ve never met anybody that has a better skill set in evaluating other people as in Andy.”

And like Belichick, Reid isn’t afraid to try new ideas. He has been at the forefront of incorporating “run-pass option” plays and other college-based schemes that are now taking over the NFL.

“It’s at least 10 years ago when Andy started talking out loud in his belief about combining concepts of the West Coast [offense] with concepts of the spread offense and create an offense that would be a meaningful step forward in the NFL,” Banner said.

“The reason we signed Michael Vick was because he thought he would be the perfect quarterback to execute that kind of new, combined offense. Look at all these younger coaches coming in and changing the game, but the reality is that the root of all that change is Andy.”

But without a Super Bowl ring, Reid is Marty Schottenheimer, or Dan Reeves, or Jeff Fisher — coaches who won a lot of regular-season games but couldn’t win the big one.

“He has to [win a Super Bowl], in my mind, just to finalize himself as a Hall of Fame coach,” said Banner. “He’s got to get it done.

“But to refer to him as someone who hasn’t coached really well, won really big games, is just to deny a large part of his history, a bunch of really big games over a long stretch of time that he did win.”