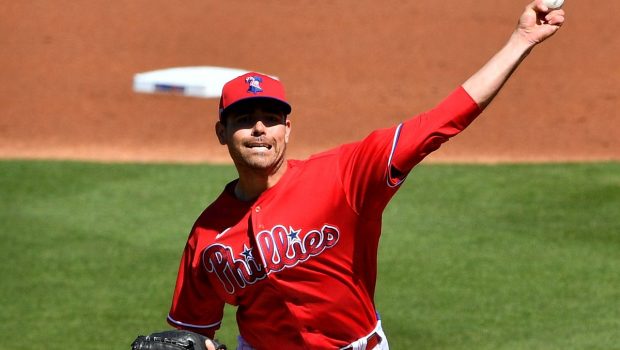 BIG PHILS DIFF THIS YEAR: MOORE, ANDERSON AT BACK OF ROTATION!

Phils manager Joe Girardi hasn’t make it official, but it sure looks like Matt Moore and Chase Anderson have jobs locked as the Nos. 4 and 5 starters after Aaron Nola, Zack Wheeler and Zach Eflin.

Moore has given up one run in eight innings in three exhibition games. Anderson has thrown seven scoreless innings and struck out eight in three appearances this spring.

“I came in here like ‘I have to win this spot,’” Anderson said after tossing three shutout innings Monday in a 4-2 defeat to the New York Yankees. “What brings out the best in most guys, and especially for myself, is competition.”

Girardi is clearly leaning in their direction.

“I think those two guys have pitched extremely well,” Girardi said of Moore and Anderson. “I feel pretty good where they’re at.”

Moore, a veteran left-hander, got a $3 million, one-year deal from the Phils after he pitched well in Japan last season. He had an edge heading into camp for a team that desperately needs a southpaw in the rotation. During the 60-game schedule last season, the Phillies did not start a single lefty. However, Moore comes with a caveat: He hasn’t had a productive big-league season since 2016 when he won 13 games.