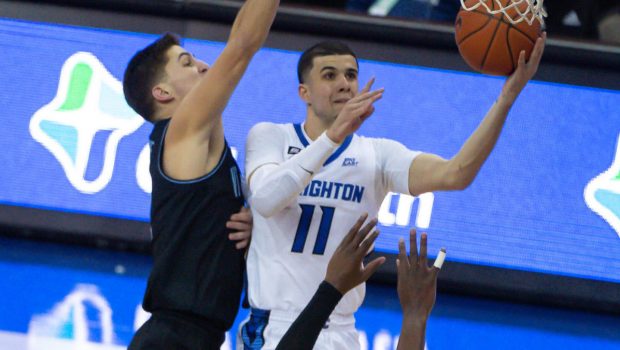 BIG EAST TITLE WILL COME DOWN TO NOVA VS. CREIGHTON!

The Bluejays have played more league games than any other Big East team.

With an unbalanced schedule, the title winner will be determined by winning percentage.

The two teams meet again on March 3 at Villanova.

The importance of winning the league title has taken a back seat to the health and safety of the players during the pandemic.

“For us, this year, titles and things like that are really not going to carry much weight,” Villanova coach Jay Wright said. “We want these guys to be able to stay mentally healthy, physically healthy and get through this year and get to play the most amount of games they can. If we can do that, we’ll feel like that this year is a success.

“As far as the way anybody else looks at it, I respect what everybody does. It’s like all the health departments in each area are different in the country and everyone is doing it differently. Everyone is trying to do their best. Here at Villanova, we’ve got pretty tough protocols around here. We’re trying to keep our players healthy, keep them mentally healthy, keep them getting better every day and then just get in as many games as we can. I have no idea what that’s going to mean at the end of the year.”

Villanova has four games remaining on its schedule — St. John’s tonight, at Butler Feb. 28, Creighton March 3 and at Providence March 6.

Creighton still has games against DePaul tonight, at Xavier Feb. 27, at Villanova and Butler March 6.