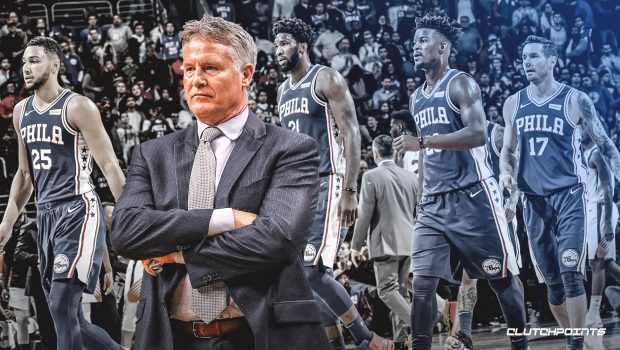 BIG D IS THE NAME OF THE SIXERS PLAYOFF GAME, BRETT BROWN SAYS!

If you’re worried about the Sixers’ chances in the NBA playoffs, starting tomorrow with their first-round series against the Nets at the Wells, coach Brett Brown has some answers.

“I would point the finger to newness and some schematic things that we feel are more applicable to winning in the playoffs,” Brett Brown said, according to Rich Hofmann of The Athletic. “We spent so much time studying over the summer really what defense wins in the playoffs. What defense are you going to have to have to guard what’s clear the offense is. It’s no secret what the offense is in late May and June.”

Brown has been tinkering with defensive rotations, noticing teams often spread the floor and hunt for mismatches, taking away the 3-point line and putting an emphasis on transition defense.

The Sixers have done well in both categories, especially in limiting threes with their length while forcing a lot of misses from the perimeter, which has helped them to be among the top-six teams in rebounding

However, they are still struggling in other areas like defending one-on-one (sans Jimmy Butler) and pick-and-rolls.

The Sixers could get tested against a young and spry Brooklyn Nets team in the first round. Having Joel Embiid means having an able shot-blocker patrolling the paint, but that doesn’t particularly erase the team’s other defensive flaws.