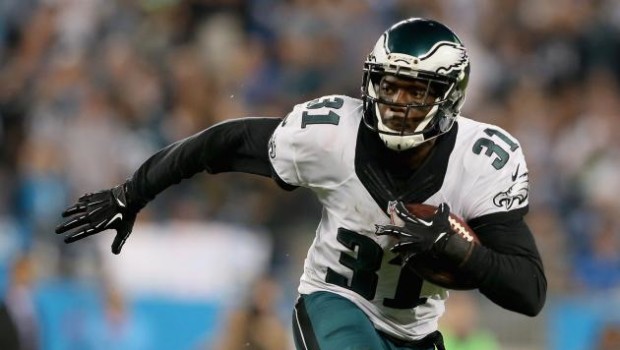 Eagle big bucks free agent cornerback Byron Maxwell got off to a shaky start in Philly, and everyone in the lame-ass local media took their shots.

According to Pro Football Focus, Maxwell was torched to the tune of nine receptions for 154 yards and a touchdown by the Atlanta Falcons in Week 1.

But from that point on, the fifth-year veteran has become a downright solid addition to the Eagles defense and secondary.

Since Week 2, however, Maxwell hasn’t surrendered more than four receptions or 68 yards in the last six games. In fact, in the previous five, he hadn’t allowed over 39 yards or a catch longer than 22.

Very quietly, Maxwell is getting the job done.

Maxwell hasn’t been a shutdown corner, and maybe he never will be. Free agency by its very nature dictates teams bid against one another and overpay for talent, and the fact of the matter is the Eagles desperately needed to improve their talent level in the secondary.

For all of his imperfections, Maxwell has certainly been an upgrade over Cary Williams and Bradley Fletcher, the previous starters at cornerback. Granted, that isn’t saying much, either, but Maxwell is playing well by any measure.

In the past five games, Maxwell has been targeted 23 times and allowed 13 receptions for a 56.5 completion percentage. Those catches have gone for a paltry 7.6 average, while yards after the catch have been limited to 60, the bulk of which came on one play against the Miami Dolphins. Oh, not a single touchdown allowed since Week 2, either. And as far as conventional statistics are concerned, Maxwell also has four pass breakups and an interception over the current stretch.

Numbers aside, Maxwell gives the Eagles a big, physical presence their secondary has long been lacking. At 6’3″, 207 pounds, with 4.4 speed, according to NFL.com, there aren’t many wide receivers the 27-year-old can’t match up with.

In other words, there really hasn’t been very much negative to speak of regarding Maxwell going all the way back to the beginning of the season.

We can debate whether he’s really worth what he’s being paid, but the ink is dry. Plus, the way the contract is structured, the Eagles can get out from under it after two years if the organization so desires.

Maxwell also tends to draw some penalties—nine by PFF’s count. Then again, that’s the risk you take to have that physicality in your secondary. A few yellow flags is hardly the end of the world.

Overall, the arrangement between Maxwell and the Eagles is paying off for both sides. The secondary and defense are vastly superior to the past two seasons, and he has a lot to do with it. For the next few seasons at least, it seems Philly is set at one of its starting cornerback jobs. Maxwell may not be a shutdown corner, but he absolutely is the real deal.