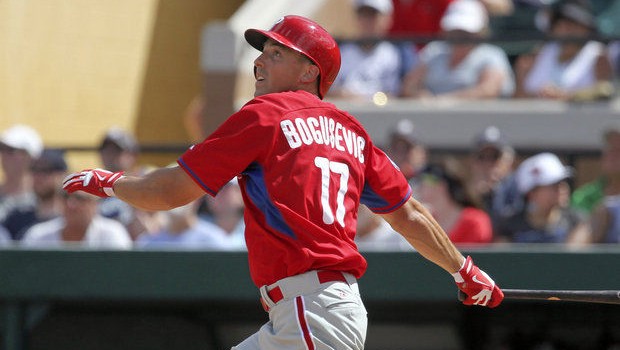 Brian Bogusevic, a last-minute replacement in the Phillies’ lineup, hit two home runs off Tigers starter Anibal Sanchez, and Russ Canzler singled to set up the go-ahead run in the ninth for a 5-4 win over the Tigers Saturday afternoon at Joker Marchant Stadium.

Bogusevic wasn’t in the lineup until Jeff Francoeur was scratched with a sore left oblique. He took over Francoeur’s original cleanup spot and jumped a 91-mph fastball for a two-run homer, part of a 33-pitch opening inning for Sanchez in his third spring start. The ball landed near the bottom of the left-field berm, just out of Xavier Avery’s reach at the fence.

“He’s here in spring training having a look like everybody else. He’s shown a good bat,” manager Ryne Sandberg said of Bogusevic. “The ball really comes off his bat well. He’s shown a good arm in the outfield. He’s an interesting guy. We have some interesting players in camp, so we’ll continue to look and watch.”

Sanchez allowed hits to three of Philly’s first four hitters. He allowed one other hit over the rest of his four-inning performance. That, too, came from Bogusevic, who sent a slider out on a line over the right-field fence in the corner for a third-inning solo shot.

“We want to be a team that doesn’t sit back and count on the home run, but with more contact and possibly cutting down on strikeouts and having a good approach, some of that can happen,” said Sandberg, whose Phils have hit three homers in the last two spring games after belting two in the first 10 contests. “So that’s a plus sign of what we’re working on. When you hit the ball correctly and you hit down at it through the ball, you can backspin some balls out of the park.”

The Tigers chipped away at the 4-1 deficit with help from Phillies starter Paul Clemens, who walked four batters and threw just 18 of 48 pitches for strikes over 2 1/3 innings. Jefry Marte’s fifth-inning solo homer completed the comeback minutes after Marte’s off-balance threw robbed Odubel Herrera of a bunt single leading off the top of the innings.

The two bullpens traded scoreless frames from there until Canzler hit a one-out single in the ninth off Alex Wilson and went to third base on Chris McGuiness’ single. Catcher Shane Zeile’s passed ball allowed Canzler to score.