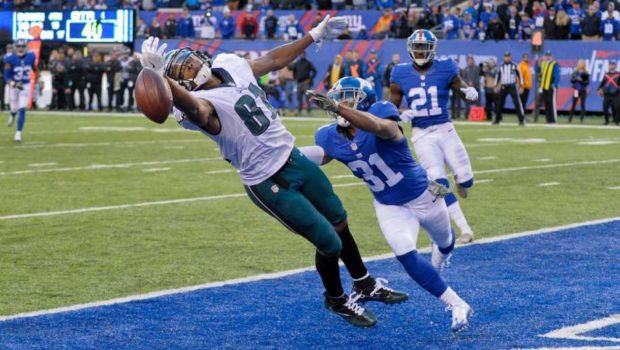 THE BIG BLUE WALL: HOW THE GIANTS’ DEFENSE STOPPED THE EAGLES

The New York Giants didn’t crumble yesterday, as has been their habit.

In the final minutes of their NFC East game with the Eagles on Sunday, the Giants made a defensive stand on four last-ditch Eagles passes from the Giants’ 17-yard line to preserve an important 28-23 victory at MetLife Stadium.

“Last year, when that kind of stuff happens, we blow it,” said Giants cornerback Trevin Wade, who defended against the Eagles’ final pass attempt. “We’re changing how some things happen.”

Thanks to a three-game winning streak, the Giants (5-3) are legitimate playoff contenders in November for the first time since 2012.

And the Giants appear to have a new attitude when confronted with adversity: They have decided to go down fighting.

It was a deflected Eli Manning pass that was intercepted by Birds linebacker Jordan Hicks that gave the ball to the Eagles deep inside Giants territory with slightly less than two minutes left in the game.

The Eagles (4-4) picked up one first down, but on the next four pass plays, the Giants’ defensive coordinator, Steve Spagnuolo, boldly blitzed the rookie quarterback Carson Wentz, sending multiple linebackers and defensive backs into the Eagles’ backfield play after play.

Backpedaling and sometimes on the run, Wentz repeatedly missed his receivers.

“Spags doesn’t back down,” Giants linebacker Keenan Robinson said, using Spagnuolo’s nickname. “That’s not how we want to play.”

Throughout the Giants’ locker room, Sunday’s outcome was having an emboldening effect on the team, especially since the opponent was the division rival Eagles, who entered the day with a four-game winning streak against the Giants.

“Philadelphia has had our number the last few games,” said Manning, who threw four touchdown passes while completing 22 of 36 passes for 257 yards. “So it’s nice to reverse that.

“The important thing is that we’re finding ways to win in close fourth-quarter games. It’s one of those things you have to do, and do with consistency.”

The season may only be half over, but already the Giants are doing more things correctly than in the past three seasons, each of which they ended with a losing record.

The Giants, for example, jumped out to a 14-0 lead after their defense twice intercepted Wentz, who completed 27 of 47 passes for 364 yards. In recent seasons, the Giants struggled to force turnovers and were inept offensively once they neared an opponent’s goal line. But after each of the interceptions of Wentz, Manning quickly threw a touchdown pass.

The first was to wide receiver Odell Beckham Jr., who caught a short pass and was nearly untouched as he outran two defenders for a 26-yard score. Beckham’s ability to catch routine over-the-middle passes and turn them into easy scores is becoming one of his trademark contributions.

The second Giants touchdown was a 30-yard bomb to the rookie wide receiver Roger Lewis Jr., who dashed alone behind the entire secondary.

The Giants took an 11-point lead into the third quarter, but the persistent Eagles cut the lead to 4 points before Manning struck again. Waiting in a crowded pocket, and just before being decked, Manning lofted a well-timed pass to the rookie wide receiver Sterling Shepard in the right corner of the end zone for a 32-yard touchdown.

The score put the Giants ahead by 28-17, but two field goals by Caleb Sturgis whittled the Giants’ lead to 5 points.

The Giants have also had difficulty in previous seasons running out the clock with a lead, mainly because they struggled to mount an effective rushing game. But after they took possession with 3 minutes 51 seconds left in the fourth quarter, it appeared that the Giants’ running game might yet bail out a defensive unit that had already made two fourth-down stops in the game.

The Giants took over at their 12-yard line and immediately picked up a first down on successive runs by the rookie running back Paul Perkins, whose role is increasing exponentially. But on a third-and-4, Manning’s pass over the middle was deflected into the hands of Hicks.

The crowd grew noticeably anxious, and the Giants’ sideline seemed restless as well. But the Giants’ defense had been aggressive for most of the game, not often sacking Wentz but regularly unsettling him, an insistent approach the defenders prefer in tough situations.

“Absolutely, we want to blitz and attack,” said linebacker Jonathan Casillas, whose leadership role continues to expand. “You don’t want to sit back and let them attack you.”

In the end, the Eagles’ final rally stalled, and the Giants took over and ran out the clock.

“We believe in each other, and we put our foot on the gas and keep playing that way,” Coach Ben McAdoo said. “I don’t think we’re going to play any differently for the foreseeable future.”

The news for the Giants was not all good on Sunday. Left guard Justin Pugh, one of the team’s best offensive linemen, limped off the field with a sprained knee and did not return. Wide receiver Victor Cruz, who set up a score with a 46-yard catch along the right sideline, was sidelined by an ankle injury.

In the end, it was left to Manning, the team’s most seasoned and accomplished veteran, to define what the Giants had achieved in half a season.

“If you look at the scores, a lot of NFL games are now close and come down to the final minutes,” Manning said. “And those are the things that can make or break a season. So it’s good we’re starting to learn to get on the good side of some of those games. But we’ll also have to continue to do that. That’s what matters.”