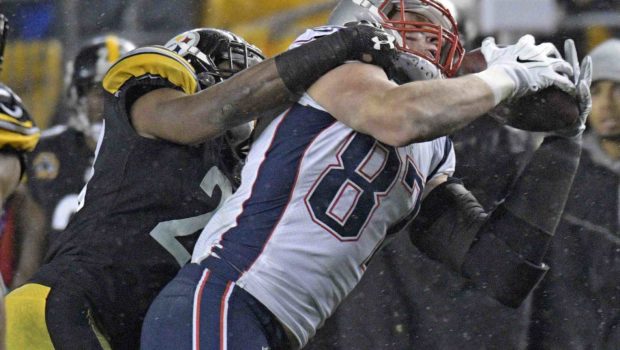 This wasn’t the Immaculate Reception, when the Steelers miraculously transformed a batted pass into a win on Christmas Eve.

Let’s just call this the Brain Fart That Cost Home Field in the Playoffs!

In Pittsburgh’s 27-24 loss to the New England Patriots, a failed fake spike attempt by Pittsburgh quarterback Ben Roethlisberger led to an interception that effectively ended the game.

And it left both teams with 11-3 records, giving New England the edge because of this tie-breaking win.

But the play, according to the one who orchestrated it, wasn’t supposed to unfold the way it did.

Following a short completion that advanced the ball to New England’s 7-yard line, the clock continued to run. So Roethlisberger rushed to the line of scrimmage and quickly snapped the ball.

“It wasn’t a fake spike,” Roethlisberger said after the game. “I was yelling ‘Clock it.’ It felt like that was the thing to do, to clock it and get yourself one play. But it came from the sidelines: ‘Don’t clock it. Don’t clock it.’ Well, at that time, everyone thinks it’s getting clocked, so you don’t have time to try to get everyone lined up. I saw (receiver) Eli (Rogers) try and run a quick slant in there, and at that time, you’ve just got to try to make a play. I probably didn’t make a good enough throw.”

Patriots safety Eric Rowe deflected the pass, popping it up in the air and allowing fellow safety Duron Harmon to intercept the throw. The ending was a harsh finale for the Steelers, who two plays earlier had tight end Jesse James’ go-ahead touchdown overturned on a controversial review.

When asked to clarify who made the call in Roethlisberger’s headset to run a play, he said it came from offensive coordinator Todd Haley but also added that it was coming “from the head guy,” which could mean head coach Mike Tomlin.

“Maybe that’s on me,” Roethlisberger said. “Maybe I should have clocked it. I don’t know. We’re not going to look back and second guess anything or anybody. We lost the game and I threw a pick at the end of the game to lose it.”

The ball was snapped with nine seconds left, and Roethlisberger threw it with six. Because the Steelers were down just three points, and because it was a third down, he had the option of heaving it out of the end zone and leaving enough time for place kicker Chris Boswell for a short chip shot field goal that would have tied the game.

While receiver JuJu Smith-Schuster was answering questions about the final play, receiver Darrius Heyward-Bey interrupted and said, “We play receiver. We do what the quarterback tells us to do.”

Both Smith-Schuster and Heyward-Bey were lined up at the bottom of the formation, and did not run routes, appearing to think the ball would be spiked.

“That was just a call where (Roethlisberger) signaled me something and I ran across the field,” Rogers said. “I think that was (Patriots cornerback Malcolm Butler) on me. He just kind of grabbed me and changed how I was going to catch the ball. I thought it was a flag but it was all good.

“He made a better play. He made the play.”