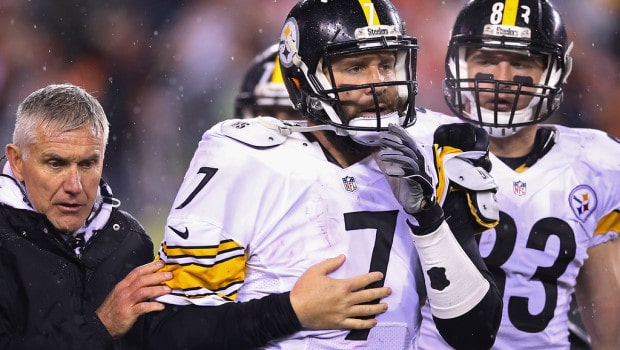 Big Ben Roethlisberger showed why he is considered one of the best clutch quarterbacks in the NFL when he came back from an injury last night and led his Pittsburgh Steelers to an 18-16 win over the Cincinnati Bengals in a Wild Card game at Cincy.

Vontaze Burfict, a hero minutes earlier for a pass interception, was called for a personal-foul late hit on Steelers wideout Antonio Brown with 22 seconds to play. That put the ball on Cincinnati’s 32; another personal foul, this one on Adam Jones, moved it 15 yards closer to the Cincinnati end zone.

Chris Boswell made a 35-yard field goal from there, with 14 seconds to play. The worst loss in Bengals’ history? Possibly.

We won’t know for awhile what the fallout from this game will be. Owner Mike Brown is a deliberate man. We do know that the best Bengals team of the Marvin Lewis era is going home empty-handed. And given the herd of free agents on this team, the current era is done.

This was a brutal, cruel, bitter game that will be remembered by both teams and towns for a long time. It was borderline barbaric and that was wrong. In the end, that mattered not at all to most fans, who had waited a quarter century for this night. Only to see it vanish in the rain, beneath a yellow flag.

It was an entirely out of tune and strange first half, in which everything you thought you knew about this game was wrong. In no particular order:

The Steelers ran 17 times. Their longest completion was a 27-yard dump-off to a running back. During one nine-play stretch in the second quarter, the Steelers ran seven times, took a sack and spiked the ball after a busted play.

Antonio Brown? Hood ornament. Mike Tomlin ordered the ball handed to his third- and fourth-string backs. Go to the head of the geek class if you know the legendary Jordan Todman and the always dangerous Fitzgerald Toussaint.

(Roethlisberger did throw 20 times in the first half, but eight were in the final 1:47, when the Steelers were in hurry-up mode.)

Roethlisberger was dynamic compared with A.J. McCarron. McCarron fumbled a snap and had the ball poked from his hands while scrambling. The Bengals recovered both, but they couldn’t stop a badly under-thrown deep ball from being intercepted.

The McCarron of the previous four games did not attend the game for three quarters Saturday.

With a quarter to play, the Bengals trailed 15-0. But they’d also knocked out Roethlisberger. Burfict sacked the Pittsburgh quarterback cleanly and landed hard on Roethlisberger’s right shoulder. Roethlisberger walked off the field holding his throwing arm, then departed on a cart, as plastic bottles rained down from the south end zone stands and fans cheered the injury.

Nice. All’s fair in hate and war, I suppose.

Roethlisberger did return for one final drive and won the game.