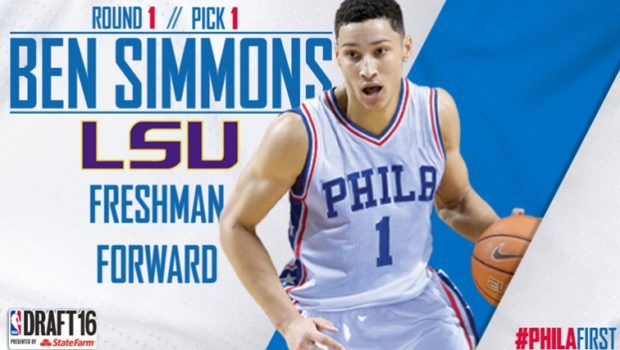 BIG BEN SIMMONS IS THE NEW FACE OF THE SIXERS FRANCHISE!

Meet the new, 19-year-old face of the Sixers’ franchise.

With the first overall pick in the 2016 NBA draft, the Sixers selected LSU forward Ben Simmons.

Simmons has known 76ers head coach Brett Brown his entire life as his father used to play under Brown in Australia.

“He’s known me ever since I was born. We’ve had the connection for a while and now it’s at this point. It’s kind of strange how it’s happened like this,” Simmons said.

On Wednesday, the 19-year-old did not divulge any spoilers, but did say he wanted to be drafted number one.

Simmons worked out with the 76ers on Tuesday.

“I had a good feeling when I was working out there. Good vibes. I’m looking forward to it,” Simmons said. “It felt good, finally to have an actual jersey on. Last time I played was three months ago, so to have it on just felt good.”

Simmons joins Shaquille O’Neal as the only number one picks from LSU in the NBA Draft.

As for the 76ers, the last time they had the first overall pick in the NBA Draft was in 1996 when they selected Allen Iverson.