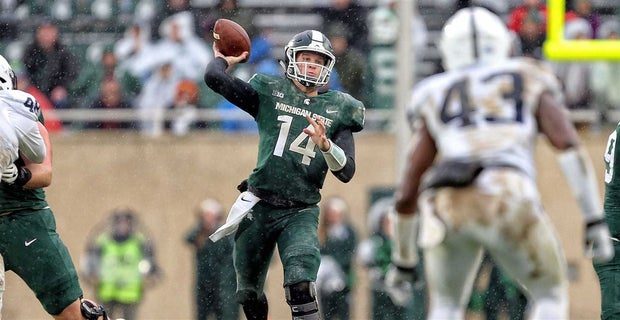 BEWARE PENN STATE: MICHIGAN STATE MAY BE A TRAP GAME!

“Coach Franklin has done a great job there thus far,” Michigan State coach Mark Dantonio said. “We’ve played well against them and we’ve found a way to win the last two years. So should be exciting game to watch. Opportunity to step forward and reset.”

That’s what an underdog coach always says before playing a nationally ranked team on a roll.

False modesty is the order of the day in East Lansing.

Penn State has had two consecutive victories over ranked conference foes, including its first on the road under Franklin, to establish a 7-0 record for the second time in three seasons. As a result, the Nittany Lions have risen from No. 15 in the preseason Associated Press Top 25 Poll to No. 6 and approach November as one of 10 undefeated teams remaining in FBS competition.

Michigan State, meanwhile, has slumped to a 4-3 mark after suffering two straight Big Ten losses (34-10 at Ohio State; 38-0 at Wisconsin). The Spartans, who also fell to Arizona State (10-7) at home in September, are strangely sandwiched in between a par of bye weeks.

Speculation has begun in East Lansing that the Dantonio era could be approaching a breaking point. After winning at least 11 games five times in a six-year span (2010 through 2015), its been a series of uneven performances for Michigan State en route to 24-21 since 2016, compared to the 38-9 record Penn State has produced during the same stretch.

Despite that contrast in overall success, the Spartans dealt the Nittany Lions devastating defeats each of the last two years. In both cases, Penn State was a top-10 team and attempting to rebound from a one-point loss to Ohio State.

The Buckeyes await further down the road (Nov. 23) this time around but a trip to East Lansing presents PSU with a chance to exorcise some demons. Franklin carries a 1-4 record versus Michigan State since arriving in Happy Valley but a victory Saturday would send Penn State into its second bye week 8-0 with budding Big Ten title hopes.

The Spartans, playing against a third consecutive top-10 opponent for the first time since 1972, seek to salvage what is dangerously close to becoming a lost season. Lewerke will face Penn State for a third time as starting quarterback and, while Nittany Lions can feel some relief with Davis now graduated, senior Darrell Stewart is the Big Ten’s leading receiver.

Penn State QB Sean Clifford faces his latest test as a first-year starter and plenty of attention will be placed on go-to receiver KJ Hamler, a Michigan native who earned Big Ten Offensive Player of the Week honors last Saturday. The Nittany Lions defense surrendered multiple touchdowns for the first time this fall in its latest effort but remains near the top of FBS rankings in points allowed per game (10; third overall) and yards allowed per game (282; 12th overall).

One thought on “BEWARE PENN STATE: MICHIGAN STATE MAY BE A TRAP GAME!”