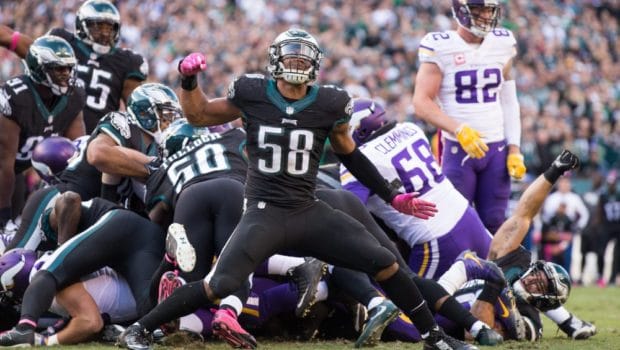 ‘BEST IN NFL’ EAGLES’ DEFENSE CAN PROVE IT ON SUNDAY!

If the Eagles have a chance to knock off the Seahawks Sunday and pave their way to the playoffs, the defense must be as stiff as it was last Sunday against the Patriots.

“This year we are showing the National Football League who we are and what we can do,” linebacker Jordan Hicks (above) said yesterday. “We believe we are the best defense in the league. In our opinion, of course, we should be in the conversation. We know this is going to be a battle of the defenses.”

Only the Vikings (152) and Seahawks (158) have allowed fewer points than the Eagles (160) this season. Here is how the two defenses compare statistically:

Stopping Russell Wilson will be the major task for the Eagles this week. Wilson is getting healthy and returning to the MVP level of play that he put on display last season.

Hicks knows Wilson presents an assortment of problems to defense. He shared what has stood out to him after film study this week.

“He likes to run. That’s his game,” Hicks said. “He likes to be on the move and extend plays with his feet. We know that he will move with the ball and look down the field to pass first, but ultimately, if you give him a lane, he’s going to run. He’s athletic enough to extend plays and make you miss. That’s what makes him so special. We have to keep him in the pocket and contain him.”