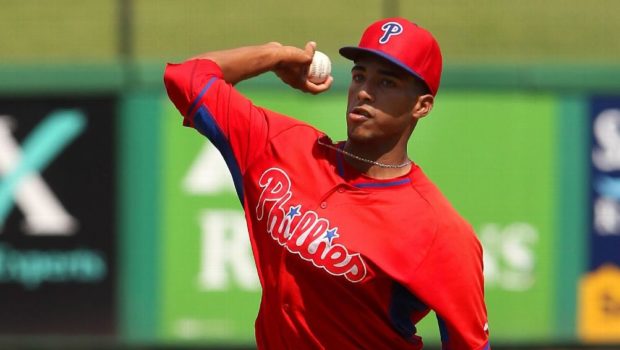 I know a few scouts who rate Adonis Medina (above) over Sanchez in the Phillies’ system because Medina has the present secondary stuff that Sixto lacks. I saw Medina on June 30 against Hagerstown, and the right-hander was throwing 91-96 mph with a four-pitch mix, including a hard-action changeup at 84-87 mph that was better when he eased up on the pitch, an above-average curveball at 76-79 mph and an average slider at 79-82 mph. (That’s assuming those two were distinct pitches, which they looked like out of his hand.) Like Sanchez, Medina gets his velocity without much effort, but his delivery isn’t as pristine — he flies open at release too often — and hitters were on his fastball, which is hard but straight. I’d rank him behind Sixto, but both have above-average starter ceilings: