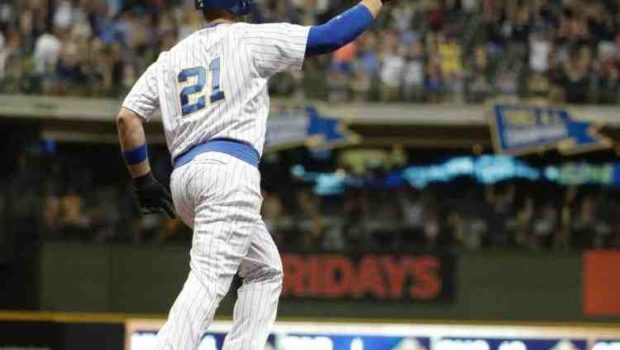 Travis Shaw hit his 20th home run of the season leading off the bottom of the eighth inning and the Brewers edged the Phillies 3-2.

Jacob Barnes (2-1) picked up the win when got out of jam in the top of the eighth thanks to a slick double play after walking two batters.

Corey Knebel pitched the ninth for his 16th save in 20 chances. He struck out Tommy Joseph for his 45th consecutive appearance with a strikeout to start the season, a major league record. Odubel Herrera squeezed a double down the third-base line with two outs, but Cameron Rupp went down swinging to end the game.

Herrera pulled the Phillies even with a solo shot off Jimmy Nelson in the seventh. Nelson went 6 2/3 innings, struck out nine, walked two and missed a chance to match his career-best four consecutive wins.

Hernan Perez made it 2-1 for Milwaukee with a home run off Aaron Nolaleading off the Brewers’ sixth.

Nola pitched four scoreless innings, but lost a 1-0 lead in the fifth when Thames smashed a two-out RBI double.

Nola’s streak of four straight starts of seven innings or more ended when Pat Neshek took over to start the seventh. Nola mixed in a changeup with his curveball and struck out seven and walked two.

He knew it could have been better.

“I didn’t get strike one enough,” Nola said. “It was a little more stressful tonight because getting behind in counts.”

Nelson cruised through the first four innings, allowing one hit and striking out seven, but cost himself a run in the fifth. Rupp walked and advanced on a single by Nick Williams. Both moved up on Nelson’s errant pitch. Rupp scored on a sacrifice fly by Ty Kelly.