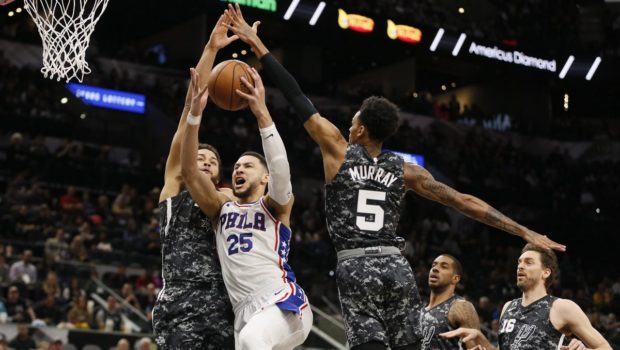 BENNY AND JOJO LEAD SIXERS TO 1ST WIN IN SAN ANTONIO SINCE 2004!

Ben Simmons scored 21 points, Joel Embiid had 18 points and 14 rebounds, and the Sixers held the Spurs to season-low point total in a 97-78 victory.

San Antonio had not lost at home to Philly since 2004, but the 76ers didn’t have a healthy Embiid and Simmons before. The 76ers opened a double-digit lead they would never relinquish with 1:35 left in the first quarter, extending the lead to as many as 25 points.

LaMarcus Aldridge had 18 points for San Antonio, which lost for just the fourth time at home this season.

The Spurs set season lows for total points and points in any half, and matched their season worst in the first quarter.

San Antonio’s only lead came on Pau Gasol’s dunk with 9 minutes remaining in the first quarter.

Gasol finished with 11 points and Dejounte Murray had 10 points and nine rebounds.

The Sixers used their athleticism and length aggressively, applying full-court pressure early to disrupt the Spurs’ offense and quickly rotating their defenders.