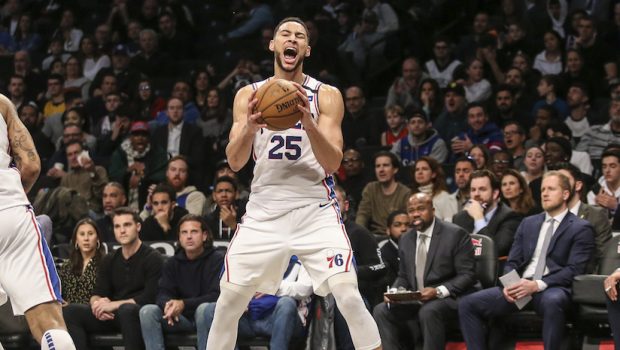 BENNY FIRES HIS JETS AND SIXERS BEAT THE NETS!

The Sixers Ben Simmons was chosen as Eastern Conference player of the week yesterday and then he showed the Nets and all of the NBA why.

He tied a career high with 34 points and added 12 rebounds and 12 assists, carrying the Sixers to a 117-111 victory over the Nets in Brooklyn.

”I just came in with that mindset to win,” Simmons said. ”I know it’s going to be tough every time we play teams like this.”

Simmons shot 12 for 14 from the field in his career-best fifth straight game with 20 or more points, finishing with his fourth triple-double of the season. The NBA leader in steals had five of them.

Al Horford added 19 points for the 76ers, who won their fourth consecutive game. Tobias Harris and Josh Richardson each scored 15.

Spencer Dinwiddie scored 22 points for the Nets, who played without Kyrie Irving because of hamstring tightness and lost their fourth straight. Caris LeVert had 16 points and rookie Nicolas Claxton added a career-best 15, but the Nets hurt themselves with 10 turnovers in the fourth quarter.

”Towards the end, we couldn’t hold onto the ball. It wasn’t anybody in particular, literally everybody was turning it over,” center Jarrett Allen said.

The Nets led 91-82 on Claxton’s follow dunk with 1:41 left in the third, but the Sixers scored the final eight points of the period. Simmons got the last six, including two free throws after he was flagrantly fouled by Claxton, who fell hard onto the court.

Simmons scored again to open the fourth and give Philadelphia a 92-91 lead, which grew to 97-91 when Raul Neto capped its 15-0 run with a 3-pointer.

The Sixers extended the lead to 105-96 on a basket by Simmons before the Nets scored eight straight while the 76ers went scoreless for nearly five minutes. Horford finally ended that drought when Simmons found him for a 3-pointer and a 108-104 edge with 1:22 to play, and Furkan Korkmaz hit another 3 to put them up five with 23 seconds remaining.

The Nets committed 22 turnovers and shot 64.7% on free throws while losing for the 11th time in 13 games.