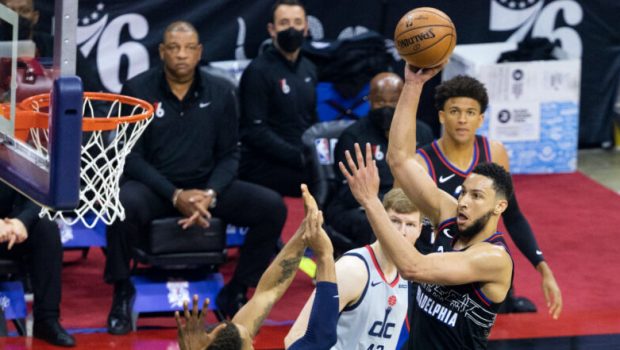 BEN BASHED AFTER 15 BOARDS, 15 DIMES, TYING WILT: ONLY IN PHILLY! And all many asshoiles can talk about was his 6 points and 9 shorts.

“Only in Philadelphia,” Rivers said yesterday when asked about the critics. “If you guys don’t know the treasure you have by now, then shame on everyone because he’s been fantastic for us. He creates points every single night for us. When Ben was on the floor, we were really good.

“I’m amazed that people don’t see what he does. We’re so caught up in the amount of points he scored. … Does it matter if Ben had all 125? Would we be mad that Joel [Embiid] didn’t score? Who cares who scores as long as we’re scoring. … When Ben plays, we score more points.”

Simmons missed all six of his free throws and his shooting deficiencies sometimes overshadow his all-around game, including his impressive defense.

“He’s a big guy and he plays guard,” said Wizards guard Bradley Beal, who scored 33 points in Game 1. “It’s not like he’s a power forward or a center guarding me. He’s very mobile, agile, and he’s strong. So that propels him. And the fact that he wants to play defense. He’s a willing defender. You don’t always see that.”