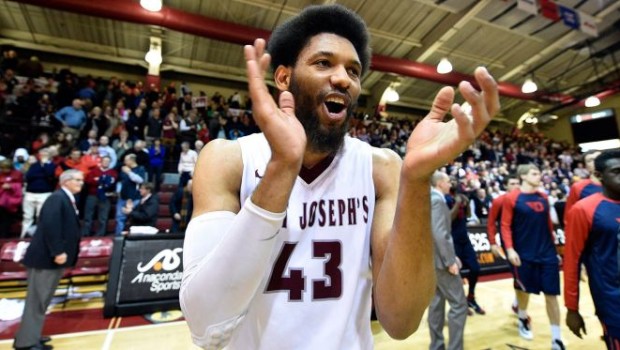 While Temple and Villanova were battling it out on North Broad Street, St. Joseph’s had its own fight up on Hawk Hill last night against Dayton, a very good team in the A-10.

Saint Joseph’s (22-4, 11-2) had five players score in double figures in its fourth straight win and 11th in 12 games overall, bolstering its resume for a spot in the NCAA Tournament. Aaron Brown scored 14 points, and Isaiah Miles had 12 points — all in the second half — 12 rebounds and five assists.

The Hawks also moved into a tie with Dayton and VCU for the Atlantic 10 lead with their first win over a ranked opponent since they beat then-No. 23 VCU in the A-10 championship on March 6, 2014.

“I think this was a big game because we were playing for first place,” Martelli said. “I think the implications for March are that (Dayton’s) obviously a tournament team. We won a home game. I think the bigger implications are the road games.”

“I give them credit,” Miller said of St. Joe’s. “I think they’re one of the best teams in the country. I think they’re gonna be primed for a great run in March because of the matchup problems they present.”

With Dayton trailing by 13 with 6:25 left, Cooke scored seven straight points to trim the Hawks’ lead to six. After Saint Joseph’s freshman Lamarr Kimble hit his second big 3-pointer of the half, Dayton responded with four straight points to make it 66-61 with 3:49 left.

But the rally fizzled from there, and Bembry helped seal the win with a putback slam with two minutes remaining.

Kimble finished with 13 points and James Demery had 12. The two connected for an alley oop that put the Hawks up 52-40 with 12:03 left and fired up the filled-to-capacity crowd at Hagan Arena. Demery had another big, one-handed dunk with 20 seconds left.

“It obviously was a big game,” Bembry said. “Of course they have the No. 15 on their back. Of course we think about stuff like that. But first off, it’s just about winning the game. It’s another game for us against another team that’s now tied with us for first place.”

The Hawks got 57 points in this week’s poll, good for 28th in the nation. The Hawks haven’t been in the Top 25 since their undefeated regular season in 2003-04. … The Hawks own the nation’s best road record at 9-0. They have three more games away from home this season, including two in the next week. … Brown scored the game’s first six points over the opening 1:30.