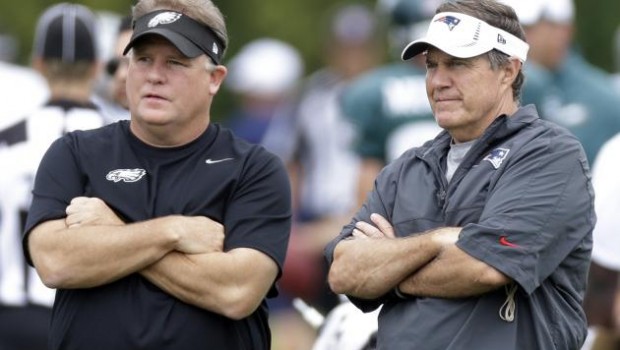 BELICHICK AND PATRIOTS — THEY’VE GOT BALLS, YOU HAVE TO ADMIT!

If “Deflategate” is considered in a vacuum, it would seem like small potatoes.

But because the Patriots and Bill Belichick (right in photo above with Eagles coach Chip Kelly) were sanctioned a decade ago over Spygate, you have to wonder:

Will this guy do anything to win?

Even break any rule he deems breakable?

A report that emerged late on Tuesday guarantees that the coach and other New England employees will have some explaining to do, at least to NFL officials, about the controversy dubbed “Deflategate.”

NFL rules stipulate that balls for their games must be inflated to 12 1/2 to 13 1/2 pounds. Under-inflated balls are softer and potentially easier to throw and catch, which could have given the Patriots an advantage in the AFC championship game against the Colts, which was played in cold, rainy conditions.

Each team in an NFL game is required to provide a dozen balls for the contest, with the home team providing an additional 12 backup balls available for testing. It is up to the officiating crew to determine whether the balls meet league standards.

The interception that Brady threw reportedly led to the investigation, as Colts linebacker D’Qwell Jackson brought it to his team’s sideline, where the apparent under-inflation was discovered. Officials took the ball out of play and tested it.

Belichick said on Monday that he only learned that morning about the probe into the balls. The coach told reporters that “we’ll cooperate fully with whatever the league wants, whatever questions they ask us.”

“I think I’ve heard it all at this point,” Brady added with a laugh. “That’s the last of my worries. I don’t even respond to stuff like this.”

Balls can become deflated for a variety of reasons — Patriots tight end Rob Gronkowski joked on Twitter that his spike after scoring may have been the cause — including through usage and weather conditions. The issue now, assuming that Mortensen’s report proves accurate, is whether the Patriots did it deliberately.

If the team is found to have caused the deflation of the balls, it will be subject to penalties such as fines and loss of draft picks. Perhaps the biggest punishment could come in the court of public opinion, as even if New England goes on to win its fourth Super Bowl under Belichick, this episode and 2007′s “Spygate” scandal could brand it as a team willing to cheat in order to gain an edge.

Update: Jason LaCanfora of CBS Sports is reporting that members of the Ravens believe that there were inflation issues with some of the balls used in their playoff game against the Patriots. From LaCanfora’s report:

“With the Patriots under investigation for possibly under-inflating balls in their playoff win against the Colts, sources said some on Baltimore’s sideline believed there may have been irregularities with the kicking balls used in their AFC divisional playoff game at Foxborough, Mass., on Jan. 10.

“Baltimore’s kicking and punting units were not getting their normal depth and distance, and some believed the balls they were using may have been deflated.”