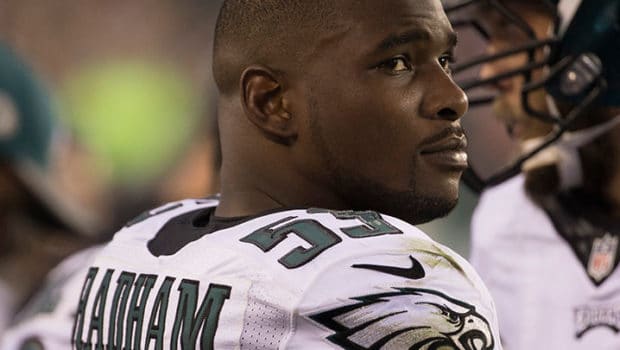 BEHOLD THE MANY TRIALS OF EAGLES LB NIGEL BRADHAM!

I hate to take a dump in the punch after the Eagles’ fine draft and free agency season, but:

On July 3, linebacker Nigel Bradham will go on trial in an aggravated assault case stemming from an altercation with a worker at a Florida resort last summer. If found guilty, he could face up to 15 years in prison.

The 27-year-old has pleaded not guilty and stated that he expects to be fully exonerated. Still, the possibility of losing his services due to incarceration, or a league-mandated suspension, exists.

Bradham also faces a misdemeanor weapons charge for attempting to board a commercial flight while carrying his legally owned handgun. This second case occurred during the Eagles’ bye week last October.

Bradham served a one-game suspension in 2014 for a marijuana possession charge that occurred in September 2013 while he was with the Buffalo Bills.

This misdemeanor citation was eventually dismissed. Yet, the NFL still chose to suspend Bradham for the opening game of the 2014 season — a full year after the initial infraction.