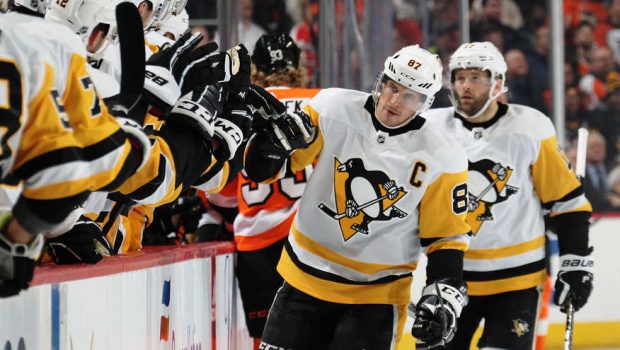 The Flyers are on the playoff bubble and the Penguins have Sidney Crosby back after a 28-game injury absence.

That’s the scene set for tonight’s game at the Wells.

The Flyers will try to enter All-Star Weekend with a 17th home win. Forward James van Riemsdyk snapped a 12-game goal-scoring drought with one goal and two assists against the Kings last Saurday. It was the second time this season that van Riemsdyk posted a three-point game and the first time since Oct. 26.

“When you’re not scoring, you’ve got to make sure you’re solid with the other aspects of your game,” van Riemsdyk said. “I’ve been trying to focus on that and do a good job of being strong on the walls, not turning pucks over, being responsible in my own end. Things like that.”

On Oct. 29, the Flyers were throttled 7-1 at Pittsburgh, so they’ll be looking to avenge that loss as the All-Star break awaits.

“These guys, all year long, they’ve been having to deal with some big-time injuries and they’ve just been rolling,” van Riemsdyk said of the Penguins, according Inquirer.com. “Different guys have been chipping in and stepping up. And now they’re getting healthy, too, so we know what kind of challenge that is. One more game before the break, so you want to go into the break feeling good about where you’re at with your game and the standings.”

With 21-year-old Carter Hart out two-to-three weeks with an abdominal injury, it’s unclear whether backup goaltender Brian Elliott or Alex Lyon will start against the Penguins. Elliott made 34 saves in the win over the Kings.

Bryan Rust recorded the game-winning goal in the third period.

Crosby continued his stellar play with a pair of assists. Crosby has three goals and eight total points in four contests after returning from a 28-game absence following core muscle surgery.

The Penguins will try to head into the All-Star break with seven wins in eight games.

Goaltender Matt Murray gained a boost of confidence with the come-from-behind win by making 34 saves for his fifth consecutive victory.

The slow start didn’t faze Murray or the Penguins.

“We didn’t say a whole lot,” Penguins head coach Mike Sullivan said of the 3-0 deficit. “I just didn’t feel it was necessary to state the obvious that we didn’t have the start that we wanted. I did say that we had a lot of hockey left and we had to respond the right way.”