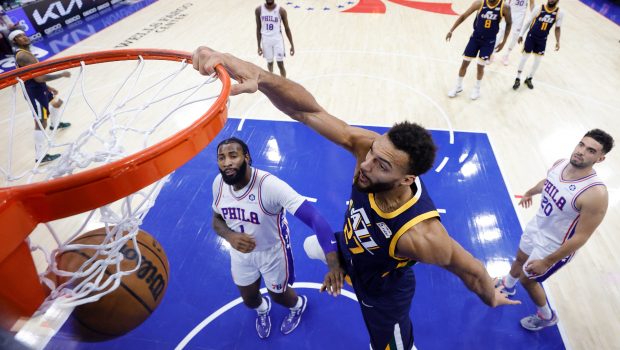 BEATDOWN! JAZZ ARE ELITE, SIXERS AREN’T, UNTIL A SIMMONS TRADE

In other words, the Sixers and their fans got a dose of reality.

The Utah Jazz are an elite NBA team, and the Sixers are not.

At least until they retool with a trade of crybaby Ben Simmons!

Donovan Mitchell scored 22 points, Rudy Gobert had 17 points and 21 rebounds and the Jazz extended their winning streak to six games with a 118-96 victory.

Joel Embiid had 19 points and nine rebounds for the 76ers. Seth Curry scored 18 points and Tobias Harris 17 for Philadelphia, which had won four of five.

Both teams were playing the second night of a back-to-back, and it was the 76ers who looked tired after halftime.

“I think you go through the ebb and flow of the season, sometimes you just decide not to be tired,” Jazz coach Quin Snyder said. “When you’re playing the right way, it makes it easier.”

The Jazz were coming off a 136-104 win over Minnesota on Wednesday night in which they made 25 3-pointers, two shy of their season high.

“They’re playing free,” Sixers coach Doc Rivers said. “They get a lot of 3’s up, they stretch the floor. They’re a tough basketball team, especially offensively.”

But against the Sixers, the Jazz, who finished with 15 3-pointers, used their inside game to take control in the third quarter. Whiteside’s three-point play pushed their advantage to double-digits, and Rudy Gay’s finish from close range and a foul shot for another three-point play gave Utah its biggest lead to that point, 71-58 with 2:27 left in the third.

The Jazz kept it up in the fourth, taking firm command on Jordan Clarkson’s 3-pointer that put them up 99-81 with 7:21 left. Utah’s lead reached as many as 23 points in a dominating fourth quarter.

“I didn’t feel like we had a lot tonight,” Rivers said.

Embiid was back on the court for the seventh straight contest after missing nine in a row due to COVID-19 protocols. He has looked more like himself of late, scoring 32 points and being active in Philadelphia’s 110-106 win at Charlotte on Wednesday, when the 76ers completed a two-game sweep of the host Hornets over three days.

And the four-time All-Star and MVP runner-up last season showed off his unique athleticism for a 7-footer against the Jazz, dribbling the length of the court while twice crossing over Whiteside before finishing with a one-handed dunk with 4:04 remaining in the first quarter.

But Embiid was quiet after halftime, scoring just six points in the second 24 minutes, and his frustration showed when he picked up a technical foul with 5:04 left in the fourth for arguing with the officials.

“That was a rough night shooting the ball, especially from 3,” Embiid said after Philadelphia went 6 of 33 from deep. “When you play against a team like that, you really don’t have room for error and we missed a lot of shots.”