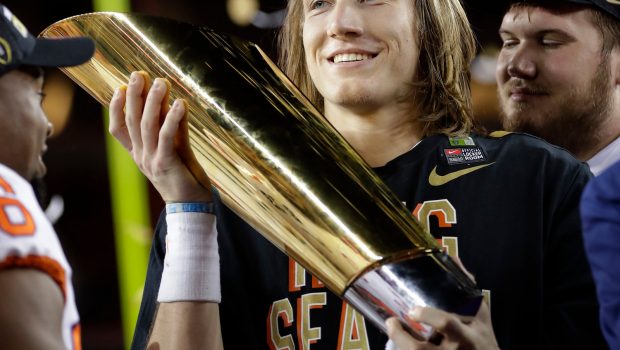 BEATDOWN! BAMA BLOW AWAY BY CLEMSON FOR NATIONAL TITLE

In a beatdown of championship proportions, quarterback Trevor Lawrence (above) led Clemson past Alabama 44-16 last night in Santa Clara, California for the College Football Playoff title.

“There was a lot of talk about ‘best ever’ all year long,” said Clemson coach Dabo Swinney, who won his second national title. “We were never in that conversation. But tonight, there’s no doubt. First 15-0 team — to beat Notre Dame and to beat Alabama to do it. This team won 13 games by 20 points or more … led by an unbelievable group of seniors. Amazing group, and I’m just thankful to be a part of it.”

Although Clemson’s place among the sport’s greatest teams could be debated, it was undoubtedly a historic night for the Tigers, who became the first Division I/FBS team to finish 15-0 since Penn in 1897.

With the convincing win, Clemson also became the first undefeated national champion in the five seasons of the College Football Playoff.

“I feel like it’s not really up for debate,” Clemson cornerback Trayvon Mullen said. “I feel like we’re the best team ever — 15-0, most wins by a senior class and we beat the team that was considered the best team in the history of college football.”

Clemson outscored Notre Dame and Alabama by a combined margin of 55 points in its two playoff games — the highest scoring margin in the five years of the playoff.

Clemson’s 28-point margin was the largest against a Nick Saban-coached Alabama team. The Tide were held scoreless in the second half.

The Tigers will hold a victory parade on Saturday beginning at 9 a.m. Eastern and concluding with a 10:30 a.m. celebration in Clemson Memorial Stadium.