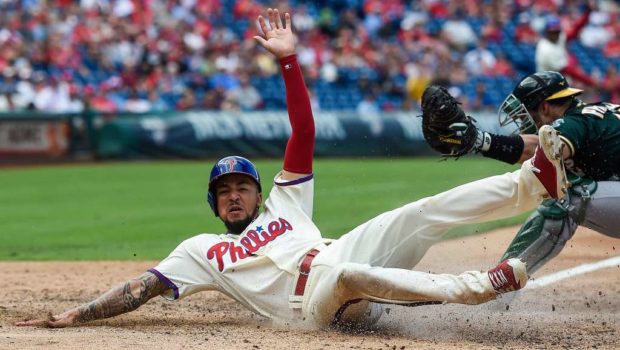 Call it the hometown payback!

Joey Wendle beat his hometown team hitting a go-ahead grand slam in the sixth inning to lift the Oakland Athletics to a 6-3 win over the Phillies.

He was one of three rookies to hit a home run for the Athletics. With the Athletics trailing 3-2 with two outs in the sixth, Wendle lined the first pitch he saw from reliever Edubray Ramos into the right-field seats, quieting the crowd of 28,054. Oakland had loaded the bases with two walks and a single. The grand slam was Wendle’s first home run of the season and the second of his career.

Wendle, who went to high school in West Grove, Pa., said he barely remembered running around the bases.

“It’s one thing to hit a grand slam to put your team ahead. It’s another when you do it at home,” Oakland manager Bob Melvin said. “And this is a close-knit group of guys, especially the younger guys that we brought up and Joey’s been with them, so they were really happy for him.

Sean Manaea (11-10) lasted five innings to earn the win. He gave up three runs and struck out four. Five Oakland relievers combined to throw four hitless innings to preserve the win. Blake Treinen converted his 11th save after a scoreless ninth.

Phillies starter Henderson Alvarez (0-1) made his first start since May 22, 2015 when he was with the Miami Marlins. He worked into the sixth inning but allowed the first two batters he faced to reach base and was removed. Both runners scored on Wendle’s grand slam.

“I liked the movement on his pitches. He had good life on his pitches,” Phils manager Pete Mackanin said. “He made a couple mistakes in that fourth inning, hanging curveball and a fastball.”

The Phillies scored first on a fielding error by Matt Chapman in the first inning.Maikel Franco had three hits, including two RBI singles.