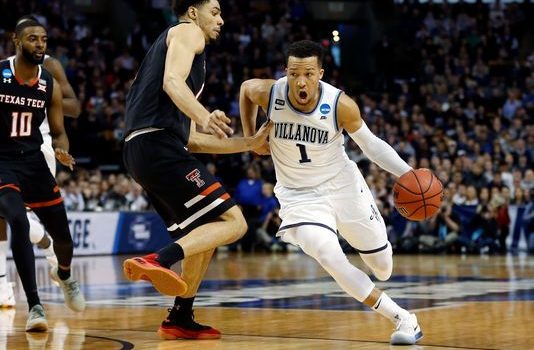 BEAST OF THE EAST! VILLANOVA TRUMPS TEXAS TECH TO GO TO THE FINAL FOUR!

Villanova earned its second trip to the Final Four in three seasons by beating Texas Tech 71-59 in the East regional final.

It was a tough, defensive game with both teams shooting under 34%. The Wildcats had dominant 51-35 edge in rebounding.

Villanova, which won the national title in 2016, had five scorers in double figures, led by Jalen Brunson (above) with 15 points.

Keenan Evans was the top scorer with 12 points for the Red Raiders, who were making their first appearance in the Elite Eight.

Texas Tech jumped out to a quick 9-1 lead before the experienced Wildcats settled in. Villanova then went on a 35-14 run to finish the half ahead 36-23.

The Red Raiders kept things close as the Wildcats went cold from the field. The deficit was only five after two Justin Gray free throws with four minutes left. But Villanova hit enough free throws late to secure the victory.

In the Final Four, the Wildcats will face either the winner in Sunday’s second game between Duke and Kansas.