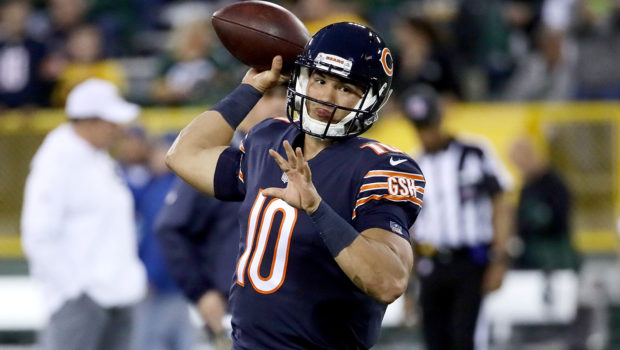 The Eagles take on the Bears this Sunday, and even though Chicago is 3-7 there are those who believe their rookie quarterback Mitch Trubisky’s upside is similar to the Birds’ Carson Wentz.

Despite not being named the starter until the Eagles traded Sam Bradford to the Vikings a week before the 2016 opener, Wentz not only won his NFL debut against the Browns in Week 1, but was an impressive 8-for-8 passing against the blitz. He won his first three games and had a 103.5 passer rating in his first four starts — with seven touchdown passes to only one interception.

But just when it looked like he might be a Pro Bowl player on a playoff team in his first year, Wentz became just another promising rookie on a struggling team. In his last 12 starts, Wentz threw nine touchdown passes to 13 interceptions, was sacked 26 times and had a passer rating of 72.3. The Eagles went 4-8 and finished 7-9 and out of the playoffs.

Even counting the hot start, Wentz’s 79.3 passer rating as a rookie isn’t much better than Bears rookie Mitch Trubisky’s 78.2. Even by the eye test, with the notable exception of accuracy (Wentz completed 62.4 percent of his passes as a rookie; Trubisky is at 53.1), Wentz as a rookie was a lot closer to Trubisky than to Russell Wilson or Dan Marino.

“We knew with Carson as a rookie, there were going to be some growing pains, and we were going to take some lumps,” Eagles coach Doug Pederson said. “And . . . we just weren’t very good as a football team last year and didn’t have the surrounding pieces around Carson.”

Wentz and the Eagles have taken a quantum leap in Year 2. With a league-best 25 touchdown passes, only five interceptions and a 103.4 passer rating (fourth in the NFL) in leading the Eagles to a 9-1 record, Wentz is arguably the leading candidate for league MVP honors.

As is the case with the Rams and Jared Goff, the comparisons are obvious. Trubisky and Wentz are No. 2 overall picks acquired after the Bears and Eagles made bold trades to move up to get their guy. Both came in with knocks on their college résumé. Trubisky started only one season — 13 games — at North Carolina. Wentz played in a pro-style offense, but at FCS North Dakota State. The best team he faced in four years was Iowa State. And both endured growing pains as rookies.

The Bears still have to acquire pieces that the Rams (Sammy Watkins, Robert Woods) and Eagles (Alshon Jeffery, Torrey Smith) did. But if Wentz can make that leap, can Trubisky?

“For sure,” Pederson said. “You kind of see it in Mitch — the arm talent. You see the athleticism. The strength. You see good decisions. Accuracy. You see the things that flash on tape that you go, ‘OK, that’s exactly the way Carson was a year ago.’

“I don’t know him personally. I’m assuming he studies the game extremely well and prepares well. And the coaches prepare him well and, probably like we did with Carson, try to keep it as simple as possible with the game plan and just let him play and use his athleticism at times to help out.

“I think you just continue to spend time with him. He gets a full offseason coming up where — like Carson — you get time away, but at the same time, you can focus in on your offense and your skill set, and you’ll see big strides from Year 1 to Year 2 in this kid.”