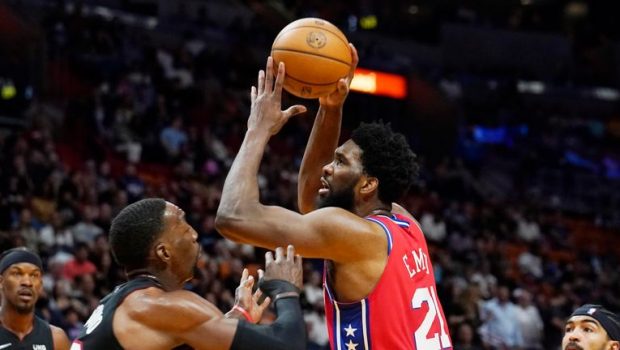 BEARD-LESS SIXERS WERE NO DAY AT THE SOUTH BEACH!

If anyone still doubts how important James Harden has become to the Sixers, last night’s loss to Miami should have been convincing.

The Beard took a maintenance day for his hammy, and the Sixers looked like they were just beginning The Process and not the team that is challenging the Heat for the top spot in the Eastern Conference.

Tyler Herro and Jimmy Butler each scored 21 points, and the Heat pulled away in the fourth quarter for a 99-82 win.

Gabe Vincent scored 16 points and Martin added 14 for the Heat, who are 11-2 in their last 13 games. Miami was again without Kyle Lowry, who missed his fourth consecutive game because of personal reasons.

Joel Embiid finished with 22 points and 15 rebounds for the Sixers, who held out Harden on the second night of a back-to-back as he recovers from a left hamstring injury. The 76ers had a season-low in points and fell to 1-14 when scoring less than 100 points.

“We’ve got to get back to starting off fast and get the ball rolling quickly,” Maxey said.

“I really don’t look at the standings,” 76ers coach Doc Rivers said. “What do they matter? You have to win. And I swear to God, after 82, someone’s going to tap me and say ‘This is who you’re playing.’ … You can only control what you can control. The other stuff is for everyone else to talk about.”

An 11-2 run in the third got Philadelphia within two, before Vincent made a 3-pointer to end the quarter and send Miami into the final 12 minutes with a 73-68 lead.

Miami then outscored Philadelphia 26-14 in the fourth.

Miami went 3-1 on the week against four East contenders, beating Chicago, Brooklyn and now Philadelphia. The only loss was at Milwaukee, a game where the Heat led by 14 midway through the fourth quarter before collapsing.

“These last four have been good for us,” Herro said.