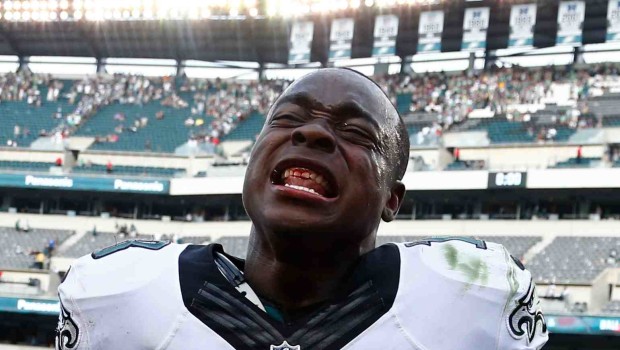 BATTERED AND BRUISED, THE EAGLES ARE THE LAST TEAM STANDING

Maclin exploded for eight catches, 154 yards and a big touchdown.

The game resembled the Thrilla in Manilla — with the Eagles as Muhammad Ali and the Redskins as Joe Frazier.

The two went toe-to-toe for 60 minutes with haymakers thrown by both teams landing in Lincoln Financial Field.

After losing two starters to injury and a third in a fourth-quarter brawl, the Redskins still had a chance to outscore the NFL’s top-ranked offense Sunday on the home turf of a reviled NFC East foe.

Trailing by three points just before the two-minute warning, quarterback Kirk Cousins had the ball and the gift of field position.

But four plays netted zero yards — a run for no gain and three incompletions. With it, the Redskins suffered a gut-wrenching 37-34 defeat to the Eagles — a loss that proved more costly than most.

Helped off the field during the mean-spirited slugfest were Washington cornerback DeAngelo Hall (Achilles tendon tear) and starting left guard Shawn Lauvao. Booted off the field was defensive end Chris Baker, ejected for decking Philadelphia quarterback Nick Foles with a shoulder slam in the mayhem that followed what looked like an interception, touching off the brawl.

Cousins, starting in place of the injured Robert Griffin III, threw for a career-high 427 yards, three touchdowns and one interception, spreading the ball among eight gratified recipients. Both Redskins starting wide receivers topped the 100-yard mark. Pierre Garcon caught 11 balls for 138 yards. DeSean Jackson, in an emotional return to Philly, which had cut him without explanation six months earlier, exacted his revenge with an 81-yard touchdown reception that knotted the score at 27. “He’s a lightning strike waiting to happen,” Cousins said of Jackson, who streaked downfield to haul in a bomb from Cousins, who anticipated his speed perfectly. Jackson shook off one Philadelphia defender, then spun around just before stepping into the end zone to stare down a second.

But the personal heroics wasn’t enough in the face of Philly’s quick-strike offense, which was more than the Redskins’ improved defense could contain.

The enmity between the division rivals was palpable from the start, with 15-yard penalties slapped on each team on the opening drive. Eagles fans booed Jackson the first time he touched the ball; later, Garcon was called for taunting.

Cousins managed the noise and nerves exceptionally well, marching the Redskins down the field on a time-consuming drive in which he didn’t miss a throw. He capped it with a four-yard completion to fullback Darrel Young to take a 7-0 lead with 8 minutes 42 seconds remaining in the first quarter. The good feeling lasted 13 seconds. That’s how long it took the Birds’ Chris Polk to run back the kickoff 102 yards for a touchdown. Washington’s Brandon Meriweather, making his season debut after serving a two-game suspension for an illegal hit in the preseason, had a shot at bringing him down but missed. Polk, who was well blocked for, met no resistance the rest of the way.

Backed up to the 13 on the next possession, Cousins remained sharp through the air, hitting tight end Niles Paul with a 37-yard completion and nicely placing a 10-yard throw just over Jackson’s shoulder, in easy reach. With running back Alfred Morris squelched on the 3, Cousins followed with a four-yard strike to Garcon that put Washington up 14-7.

Trailing 27-20, Gruden dialed up the bomb that Jackson hauled in for the 81-yard score.

The brawl followed soon after. Foles had thrown what looked like an interception, scooped up by Bashaud Breeland. In the frenzy to bring him down, Baker slammed Foles to the ground, explaining afterward he saw only a green jersey — not realizing the blocker was Foles. Philly left tackle Jason Peters threw a punch, and the fracas was on, with the players from both teams swarming and swinging at one another.

In the end, there had been no interception at all, and each team lost a starter, with Baker and Peters ejected.

Meriweather got burned on yet another Foles touchdown throw — a 27-yard strike to Jeremy Maclin that broke the tie.

Cousins’s reply was his first interception of the game, a throw to a well-covered Paul that Philly converted to a field goal that extended its lead to 37-27.

Cousins hit Roy Helu Jr. for a 55-yard gain, then followed up with Roberts, who stretched the catch to the 1. Helu carried it in for the score, keeping the game close at 37-34.

But Washington’s offense, which had been prolific all day, stalled on the final possession.