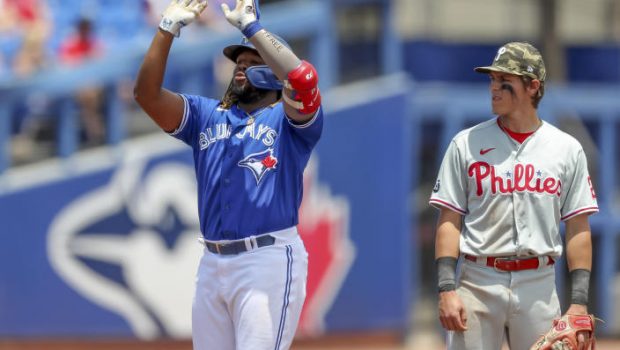 Marcus Semien and Bo Bichette hit consecutive first-inning homers, Randal Grichuk had a two-run double in a five-run second and the Toronto Blue Jays hung on to beat the battered and bruised Phillies 10-8

Harper replaced Scott Kingery in right in the sixth inning. Harper popped up a bunt for an out with two on and one out in the eighth with the Phillies down 9-4, then stranded two on the ninth when with a game-ending strikeout on a full-count fastball from Jeremy Beasley, the eighth pitch of the at-bat.

Nick Maton homered twice and drove in four runs for the Phillies. He hit his first big league home run, combining with Andrew McCutchen for consecutive homers in a three-run fifth, and added another solo drive during the sixth. His two-run single in the eighth closed Philadelphia to 9-6.

Toronto starter Robbie Ray (2-1) allowed four runs and seven hits over 5 2/3 innings. The lefty had his career-best streak of 30 1/3 innings without a walk stopped when Odúbel Herrera drew a free pass with two outs in the fourth.