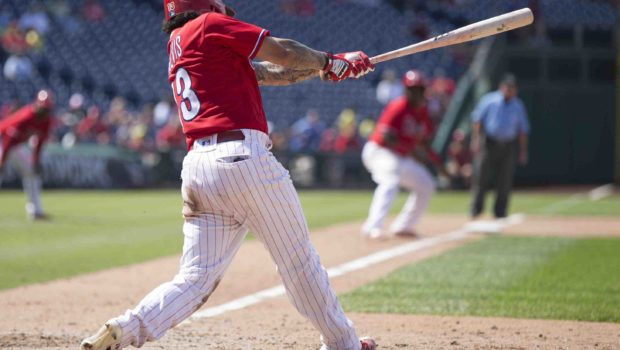 Justin Upton continued his clobbering at Clearwater with a three-run homer in the first inning, but Freddy Galvis’ game-tying two-run double in the sixth led a Phillies comeback for an 8-5 win over the Tigers yesterday.

Upton, who hit two homers in a four-hit game last March as the highlight of his first camp as a Tiger, might have topped that with his drive to the berm in left-center field, punishing Phillies starter Clay Buchholz for command woes in his second start of the spring. The former Red Sox starter walked Andrew Romine and hit Miguel Cabrera in the ribs before Upton capitalized.

Tigers starter Daniel Norris took the early lead and cruised. Five days after he used 40 pitches over 1 2/3 innings against the Yankees, the young left-hander needed just 42 pitches to become the first Tiger to pitch three innings this spring. Ryan Hanigan’s third-inning single was the only hit Norris allowed, though Daniel Navadrew a walk.

“I think today, if I was on my normal pitch count, was one of those days when I could go seven or eight innings,” Norris said, “because I was just able to trust my stuff.”

Fourth-inning home runs from Michael Saunders and Rhys Hoskins began the Phillies’ comeback against Mark Lowe before Galvis doubled in two runs with a drive off the right-field fence. Nick Wiliams singled in the go-ahead run in the seventh off Bruce Rondon, then Hector Gomez doubled in two insurance runs offRuben Alaniz.