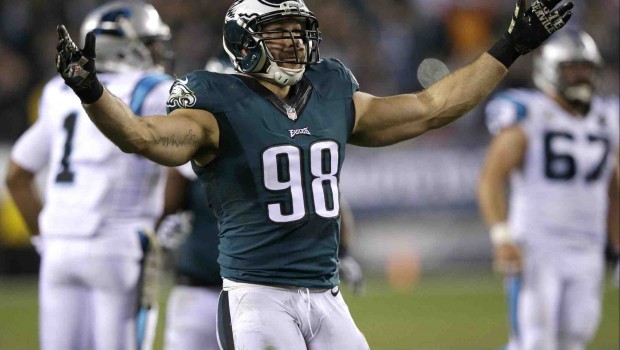 BARWIN AND CO. MAKE A DOMINATING CASE FOR EAGLES DEFENSE

The ESPN national television audience was wowed by the Eagles’ offense in the 45-21 beatdown of the Carolina Panthers, but Birds junkies also appreciate that this game was about the defense.

Billy Davis’s bunch has been taking heat all year — last year too — but last night they jelled, and Carolina QB Cam Newton would agree!

Yes, Jordan Matthews was a standout on offense — the 6-foot-3, 212 pound wide receiver led the game in receptions and receiving yards finishing with 7 catches for 138 yards and two touchdowns. With Sanchez at the helm, this may be just the beginning of a breakout second half of the season for Matthews.

But Barwin and Co. dominated the Panthers as few defenses have dominated any team — Barwin recorded 3.5 sacks and now has a team-high 10 this season. By game’s end, Barwin finished with an Eagles-leading eight tackles including three tackles for loss.

The Eagles’ dominance on special teams this season has been historic. The unit has combined for five touchdowns this season and Sproles added to that number Monday night. Darren Sproles’ first quarter 69-yard punt return for a touchdown was his second of the season. There is a legitimate case to be made for Sproles being the Eagles’ MVP this season and he showed why again against the Panthers.