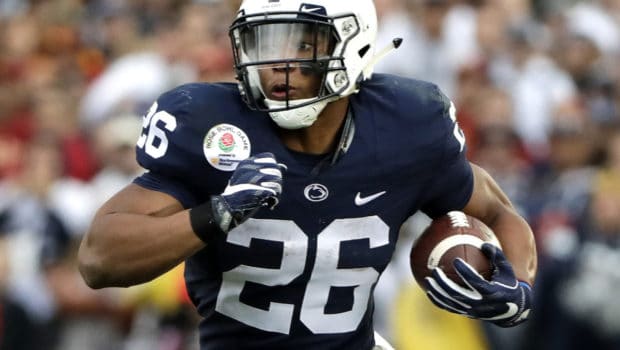 ARE BARKLEY AND PENN STATE THE GREAT BLUE AND WHITE HYPE?

What comes to mind when you think of the words “Heisman Trophy?”

Then: Have you decided, yet, if you’ll enter the NFL Draft at season’s end.

And so it began for Barkley and the highly touted Nittany Lions on what typically is considered around these parts to be the official beginning of college football season.

“I’m really just focused on the season and taking it day by day,” Barkley said. “I’m focusing on the team and trying to win every single game possible. I want to be a better person and a better player and a better leader every day.”

Barkley answered the Heisman and NFL questions about the way one might picture they’d be responded to in early August. The Heisman would be a great honor, he said, but he’s not thinking about it at all. As for the NFL, he insists no decision has been made.

He is coming off a season in which he rushed for 1,496 yards and 18 touchdowns, lowering his padded shoulder on every meaningful sophomore rushing record Penn State had.

Then, he ended the season by posting just the fourth-ever 300-plus all-purpose-yard game in Nittany Lions history against USC in a classic Rose Bowl game Jan. 2. There was no downplaying his abilities to the college football world after that.

Penn State was ranked No. 6 in the preseason Coaches Poll released last week, and head coach James Franklin knows keeping Barkley healthy will be a key in moving up in those rankings. So, he said, fans may see as much of Barkley in Penn State’s season opener Sept. 2 against Akron at Beaver Stadium than his teammates will see of him in practice the rest of the month.

He has, after all, earned the right to take it a bit easier on reps in practice.

“With Saquon, obviously, there’s a lot of excitement,” Franklin said. “Rightfully so. He’s a special guy.”

So special, both Franklin and offensive coordinator Joe Moorhead said the coaching staff will need to find creative ways to get him the ball more often. This, on an offense that has potential All-American players at tight end (Mike Gesicki) and quarterback ( Trace McSorley).

Hard to believe, but Franklin is entering the final season of he four-year deal he signed with Penn State in January of 2014 to take over as head coach after Bill O’Brien left for the NFL to coach the Houston Texans.

Athletic director Sandy Barbour has expressed interest in extending Franklin’s contract on several occasions, but at least as of Saturday, no accord had been struck, or at least, no agreement has been made public.

Franklin didn’t seem concerned about his contract status when asked about it Saturday and hardly seemed like a coach wondering if he was coaching for his Penn State future in 2017.

“I’m in football mode now. I’m focused on the season,” Franklin stressed. “We’ve been talking about this for a while, and I feel good about it. I don’t have any concerns.”