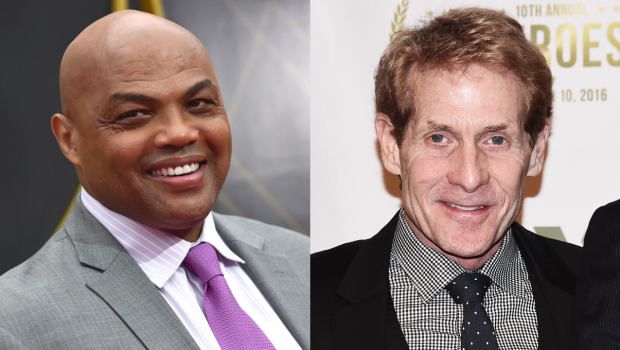 BARKLEY REALLY HATES HIM, SO BAYLESS HIDES BEHIND HIS WIFE!

Skip Bayless can dish out the criticism but when he gets some of his own he hides behind his wife.

And he would like Charles Barkley to stop talking about killing him.

Bayless explained on his podcast, “The Skip Bayless Show,” that his wife, Ernestine, has been concerned about how Barkley regularly and casually talks about wanting to kill him.

“My wife Ernestine has believed for 15 years, that Charles Barkley is nothing but a sick individual,” Bayless said.

“To her, he is just pure evil, that he is depraved, that he is a scumbag and she fears that one day, Charles will somehow … inspire some other nut to end my life. And this haunts her, this hurts her, because she believes that in the end, Charles Barkley would have my blood on his hands.

“If that were Charles’s goal from the start, if that was his goal, then I congratulate him,” Bayless continued. “Because he wins on this one. He has hurt my wife deeply.”

Barkley has often talked about wanting to kill Bayless. In 2017, he told Dan Patrick that if he had a terminal illness he fantasized about killing Bayless on his way out. Last year, Barkley said he wanted to put the “Undisputed” host in a full body cast. There have been myriad variations of Barkley’s violent wishes for Bayless, dating back at least to 2005.

“I said look, I don’t care about any of the other criticism,” Bayless recalled. “He can rip, he can slash, he can say whatever he wants. Just for Ernestine’s sake could he please stop using the k-word, please no more kill.”

“The more I’ve read about what Charles says about me, the more I realize that he watches ‘Undisputed’ religiously, and I appreciate that greatly,” Bayless said.

“Over the last 15 years, I can make the case that Charles Barkley has been my number one viewer. I just don’t think any other human has watched me as closely as Charles Wade Barkley has. I love him for that.”