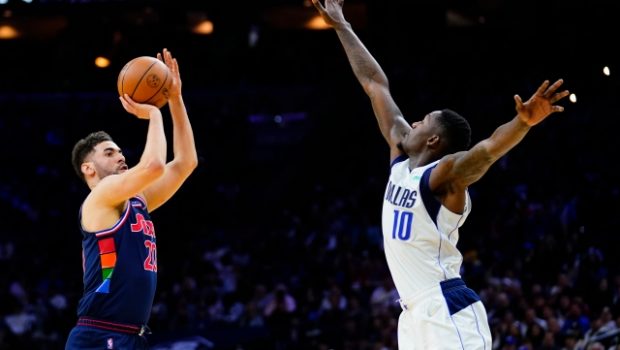 How Important is Georges Niang For The 76ers?

When we talk about the SIXERS, especially during the Daryl Morey era, we must address the little things he’s done to turn the franchise around. Of course, everybody will talk about how he traded for James Harden and got him to come back at a discount, and rightfully so, but he’s done so much more than that.

It’s the minor transactions that have helped the Sixers become a contender in the post-Ben Simmons era. It was the Tyrese Maxey pick, the Danny Green trade, the P.J. Tucker deal, and even the signing of Georges Niang.

At first glance, one may think that the Iowa State product isn’t one of the most important players in Doc Rivers’ team by any means. Nonetheless, he is one of the finest players that the state of Iowa has developed, and you can read more about other fellow Iowan NBA stars here.

But that couldn’t be further from the truth, from both analytics and the eye-test. And perhaps, the biggest part of this story is that it was never a fluke.

Doc Rivers Had A Vision For Him

Following a modest yet promising career in the G-League and with the Utah Jazz, Doc Rivers set his sights on the combo forward. His ability to knock down shots from all three levels, his willingness to put his body on the line, and overall swagger convinced the veteran coach that he was a perfect fit for his Sixers:

“Anybody that’s been through it knows free agency is kind of crazy,” Niang said. “So, to have a head coach call you and express interest and tell you how he’s going to use you and the things that he likes about your game and how they fit into his plan, going forward like I said before, that was the swinger in me wanting to be here. Just simply because that’s the guy that’s taken me in.”

“He had a vision for me, and it aligns with how I thought I fit in,” the forward continued. “He wants to win right away, and so do I. I want to be in a good culture, and that’s what he’s building here, and obviously, when I got off the phone, I was really excited because I felt like before I even had made the decision, I had a home here in Philly.”

Of course, his signing may not have sat well with everybody at first. One of those was brutally honest star Joel Embiid, who recently admitted that he actually thought Niang sucked at first. Notably, it didn’t take long before the backup proved him wrong:

“We go way back to the college days when I played against him,” Embiid said of Niang. “Before we got him, I used to think he sucked. He did a pretty good job in Utah. Just making threes and all that stuff. Obviously, on this team, he likes to do way more than that. Sometimes he’s handling the ball, setting up guys. But yeah, I used to think he sucked before. What I’m impressed with is that he’s a competitor. Defensively, he goes out there and plays with so much energy. He brings so much joy to all of us on and off the court. He’s a funny guy, and I’m just glad I have him.”

Niang is second on the team in three-point attempts per 36 minutes. Moreover, he’s knocking them down at a nearly 40% clip. Even with James Harden and Tyrese Maxey pulling up from a distance, he’s one of their most reliable sharpshooters. Also, he’s taken pride in his defense, and while he may not be a lockdown defender, he can definitely hold his own vs. stronger or quicker opposition.

Georges Niang won’t make an All-Star team soon, if ever. But he’s the hard-working, 3-and-D combo forward any contending team would kill to have on its ranks in today’s National Basketball Association.