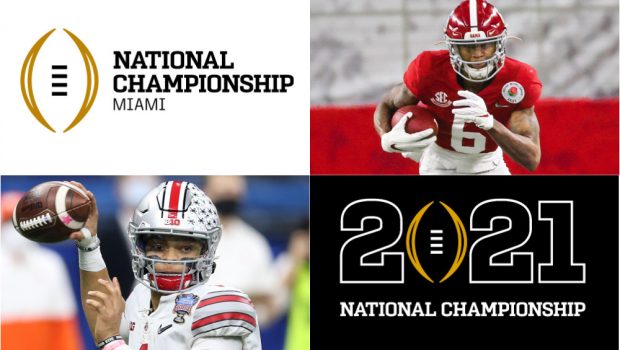 BAMA VS. OHIO STATE TONIGHT FOR TITLE: BUCKS WILL COVER 7 1/2!

It’s rare to see Alabama as just a one-touchdown favorite, but it usually means bad things for Crimson Tide backers. The Tide have lost five of their last eight games when favored by a touchdown or less, going 2-5-1 ATS. Early betting action came in on Alabama and the UNDER, moving the spread and total to -7.5 and 75, respectively.

An abbreviated Big Ten season and several canceled games prevented a good look at the Buckeyes’ potential, but we’re all aware of it now. Ohio State torched Clemson’s defense for 639 total yards in its 49-28 win in the Sugar Bowl, led by 385 passing yards and six touchdowns from quarterback Justin Fields. The junior QB put up those eye-popping stats despite playing most of the game with sore ribs after taking a hard hit to the midsection late in the first half.

If Fields still isn’t feeling 100 percent in the national title game, he can always hand the ball off to Trey Sermon instead. After running for 331 yards in the Big Ten final against Northwestern, Sermon gained 193 yards on 31 carries against Clemson, adding another 61 yards on receptions.

Ohio State coaches and players acknowledged after the Sugar Bowl that they were motivated by Tigers coach Dabo Swinney ranking them 11th on his final coaches poll ballot. The Buckeyes have thrived in the underdog role for years, covering 19 of their last 26 games when catching points, including a 5-2 ATS record in bowl games.

Wide receiver DeVonta Smith continued his torrid production in the Rose Bowl, catching seven passes for 130 yards and three touchdowns in Alabama’s 31-14 rout of Notre Dame. The Heisman Trophy finalist has recorded 1,085 receiving yards and 16 touchdown catches in his last seven games, and Smith could be in for another big night against an Ohio State secondary that allowed the most passing yards per game in the Big Ten.

Alabama’s 31 points against the Fighting Irish was the team’s lowest scoring output of the season and came on the heels of three consecutive 50-point performances. However, the Tide might have taken their foot off the gas a bit after jumping out to an early 14-0 lead and turning things over to their defense. A couple of weeks after allowing 46 points in the SEC championship game against Florida, the Tide’s stop unit held an opponent to 17 points or less for the seventh time in its last eight outings.

Unfortunately for Alabama bettors, the Tide gave up a touchdown in the final minute of the Rose Bowl to allow Notre Dame to earn a backdoor cover as an 18.5-point underdog. The Crimson Tide are now just 4-7-1 ATS in their last 12 postseason contests, including 0-4 ATS in their four Bowl Championship Game appearances.

Ohio State is 11-2 ATS in its last 13 games as an underdog of a touchdown or more. I’ll grab the value with the Buckeyes against a Tide team that has recently struggled to cover numbers as postseason chalk.