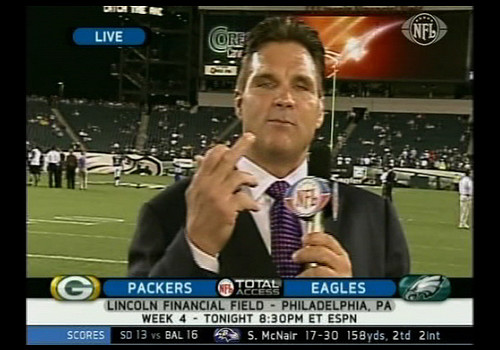 “On every single level this is a play that is to be penalized but it should be fined. This is the type of hits that, ya know, happened to Brady in 2007 and they put the rule in. You can’t hit the quarterback below the knee.

“This is indefensible in anyway. The only thing I’m surprised by is that Sam Bradford didn’t fight him. If that was me back there and I don’t if I have a knee injury history or not, if somebody hit me low like that I would have fought him.”

However, despite the controversy Suggs’ hit has caused, the NFL has already deemed the play a legal hit.

Baldinger adamantly disagreed with the ruling.

“Obviously, the referees and the officials don’t know the rules,” Baldinger said. “Like, I love Terrell Suggs, he’s a hell of a player but this is as bad a play and literally if you look at Sam Bradford as Suggs is hitting him, his left leg is extended.

“He is trying to protect himself. Like these are the types of plays that actually Carson Palmer and Tom Brady got hurt on. These exact type of plays. And for any of these officials to now listen to Dean Blandino, who has never officiated a game in his life, okay, let’s be clear about what Dean’s role is here.

“Any of these officials that look at this will challenge Dean Blandino today going ‘hey Dean, listen, I’m looking right at this thing and Suggs is going for his left knee and Bradford is doing his best after handing off just to protect himself and getting himself out of harms way.'”