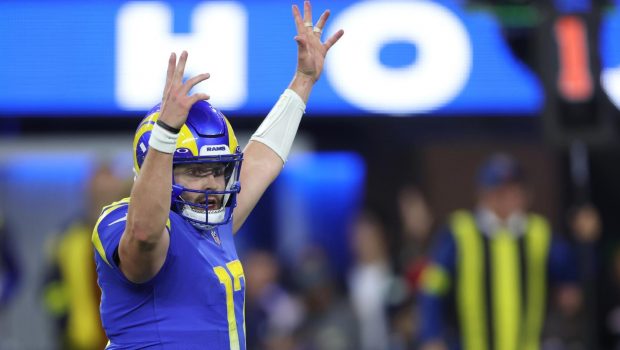 Baker Mayfield, who was waived by Carolina on Monday and claimed by the Los Angeles Rams on Tuesday, led the Rams to two late fourth-quarter touchdowns and a stunning 17-16 victory over the Las Vegas Raiders, capped by a 23-yard scoring pass to Van Jefferson with 10 seconds left.

“I don’t know if you could write it any better than that,” Mayfield said.

“Obviously, we’d like to be a little bit more stress-free, but it’s a pretty damn good story, I’ll be honest with you.”

Mayfield completed 15 of 20 passes in the fourth quarter, the second-most completions in any quarter of his career, according to ESPN Stats & Information research.

A former Heisman Trophy winner and No. 1 overall pick, Mayfield was asked where Thursday night’s comeback win with his new team ranked among his career highlights.

“This is up there to be honest with you,” he said on the Amazon broadcast.

“I didn’t think it was going to play out like this, but I am sure happy we covered the two-minute operation, my goodness.”

Down six with 1:41 to go backed up your own two-yard line? @bakermayfield was feeling dangerous. 😤 pic.twitter.com/gDuUL1QsZH