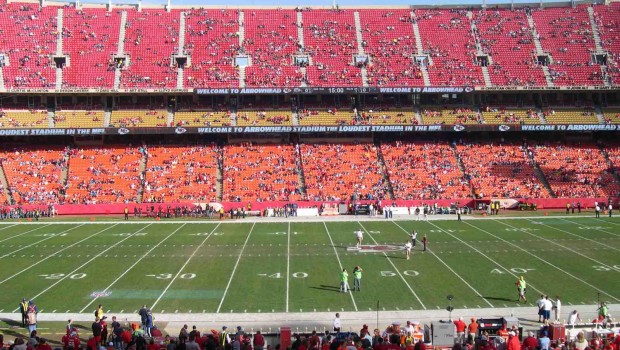 NFL STADIUMS MAY LOOK LIKE THIS WITHOUT BLACKOUT RULE

For Roger Goodell and the NFL, the hits just keep on comin’.

Just as the nation has been shocked by the Ray Rice issue and the hardly believable Goodell claim that he hadn’t seen the second tape that shows he brutally attacked his future wife, here comes the FCC:

The clock appears to be winding down on the unpopular sports blackout rule that has left some football fans in the dark.

Under the 40-year-old federal regulation, cable and satellite providers are prohibited from airing NFL games that are blacked out on local TV when a team fails to sell enough tickets to fill a stadium. The rule has drawn increasing scrutiny in Washington amid concerns that it unfairly punishes football fans, and the FCC is moving toward sacking it — a decision that could come as soon as this fall. Agency Chairman Tom Wheeler and senior GOP Commissioner Ajit Pai both say it is time to punt.

The agency’s next opportunity for a vote is at its Sept. 30 meeting.

And if the blackout rule is stricken, fans in cities like Buffalo, Jacksonville and Cincinnati, which don’t often sell out their games 72 hours before kick-off, if at all, will be able to see them on TV.

Of course, that will mean that NFL stadiums will have vast pockets on empty seats, which will fly in the face of the NFL’s image as a business behemoth.

Remember, the cost of an NFL ticket is excessive, especially compared to the falling prices of quality flat screen TVs

“It should not be that somebody who has lived in Cincinnati his whole life, works hard, pays taxes, helps subsidize that stadium, can’t watch the game because it’s been blacked out and can’t go to the game because tickets are too expensive or he’s disabled,” said David Goodfriend, chairman of the Sports Fan Coalition, the group that got the ball rolling at the Federal Communications Commission. “That’s treating the fan like a chump.”

Wheeler, a Democrat, proposed ending the rule late last year, responding to a petition from the coalition and other consumer groups. The commission said changes in the sports television industry “have called into question whether the sports blackout rules remain necessary to ensure the overall availability of sports programming to the general public.”

The chairman’s effort gained momentum when Pai, who opposes Wheeler on most major issues, joined him in criticizing the rule. As a backdrop for his announcement, Pai chose Buffalo, a city that’s been a poster child for NFL blackout battles.

“The FCC shouldn’t get involved in handing out special favors or picking winners and losers, and in my view, there is no reason for the FCC to be involved in the sports blackout business,” said Pai, a die-hard Kansas City Chiefs fan.

While the blackout rule applies to all televised sporting events, it has, in effect, become the NFL’s rule because the league has some of the most restrictive blackout policies. It also is fighting the hardest to keep the regulation in place.

This summer, the NFL and the league’s broadcast partners mounted a strong defense of the rule, saying it ensures football remains on free television and benefits restaurants and sports bars that show the games, as well as stadium workers. Any FCC action to eliminate the rule, they warn, will hasten the migration of NFL programming to pay TV, ultimately depriving many fans of the ability to watch games.

The NFL effort is leaning on some Hall of Fame talent in its fight to preserve the rule. Lynn Swann, the former Pittsburgh Steelers receiver, is acting as a spokesman for the Protect Football on Free TV campaign, which is sponsored by the league and its broadcast partners.

“The bigger loser becomes those 60 million people, and all the fans out there, who would not be able to get their football on free-over-the-air TV,” Swann told Politico.com. “If you gave the sports coalition what they are looking for, then you’re looking at the gradual change of the value of the television package for the NFL’s broadcast partners.

”Let’s be honest and straightforward here: We want more people to see the game … but it still is a business. If the revenue generated from the broadcast television contracts becomes less valuable, that’s going to change.”

FCC email boxes have been flooded with comments generated from the campaign’s website, according to agency sources. And in recent weeks, groups like the AFL-CIO and the Rev. Jesse Jackson’s Rainbow PUSH Coalition have joined the effort to keep the rule.

Key lawmakers have weighed in against the regulation — and they are unlikely to be swayed.

Sens. John McCain (R-Ariz.) and Richard Blumenthal (D-Conn.) have long called for dumping the rule. The two senators this summer pushed the FCC to move forward on eliminating the regulation, saying it “harms consumers by insulating the NFL from market realities and punishing fans in cities with large stadiums and declining populations.”