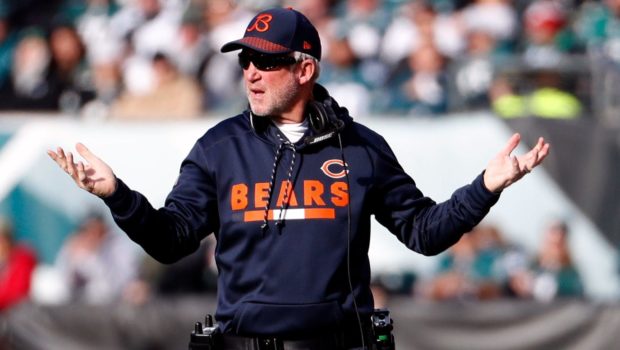 BAD NEWS BEARS ON VERGE OF FIRING COACH AFTER BEATDOWN BY EAGLES!

The Chicago Bears had the look of a Pop Warner team as they had their doors blown away by the Eagles 31-3.

And afterward they sounded fed up and angry.

First, Bears coach John Fox responded to his shaky job security with as little patience as Fox’s bosses should have for his team’s increasingly sloppy play over three straight losses.

“Frankly, I don’t give a rip,’’ Fox said. “That’s not why I do this. Whatever happens, the things I control I will work to control.’’

Minutes after Fox dismissed speculation that goes with the territory, Bears guard Kyle Long showed how frayed everyone’s nerves have become in the locker room. Long snapped when asked about the Eagles’ elaborate group celebrations after touchdowns and interceptions combining Broadway and Broad Street to the delight of 69,596 delirious souls — except the 53 men in white jerseys.

“Look, I’m not here to watch celebrations, I’m here to block their defensive front and get yards — I could give two (expletives) about their celebrations,’’ Long said. “If they want to go on ‘Dancing With the Stars’, that’s great for them. We’ve got to find a way to win football games.’’

The Birds broke out into a dance in the second quarter after Alshon Jeffery caught an 8-yard touchdown pass and the Eagles wide receiver rolled an imaginary bowling ball that knocked down a huddled group of teammates like a strike at an alley.

The Eagles hardly came close to a perfect game — they lost three fumbles — but still dominated during one of the most inept Bears efforts of the Fox era. Jeffery kept the football as a keepsake to remember scoring against his former team but, alas, the day was forgettable in every way for the Bears.

“The game was not competitive from early on,’’ Fox said with surprising candor.

The Bears came within a late Mitch Trubisky scramble of breaking a 65-year-old franchise record low for rushing yards, gained only 140 yards overall and didn’t pick up a first down until 14:09 remained in the third quarter. They looked unprepared and undisciplined, needing a first-half timeout after the punt team ran onto the field on third down and committing an array of costly offensive and defensive holding penalties. They fumbled snaps, missed tackles — Eddie Jackson was a human hurdle — and let balls sail through their hands.

The Bears never having fired a head coach during the regular season might offer the most compelling evidence to do so now, to try something different.

If Fox’s firing is as inevitable Jan. 1 as it appeared after the Bears’ latest demoralizing loss, why not use the final month to let defensive coordinator Vic Fangio make his case as head coach? Why not devote December to getting in front of other teams that also might be pursuing Patriots coordinator Josh McDaniels, Eagles assistant John DeFilippo or any mystery candidates? Maybe Fox hasn’t stopped coaching the Bears, but so many dumb penalties and mental mistakes leave the impression that players have stopped responding.

Look no further than Philly to see what Chicago is missing.

Meanwhile, the Bears returned home with civic confidence doubting everything, from the front office to the franchise quarterback. Trubisky struggled mightily, completing 17 of 33 for 147 yards and two interceptions. Pregame comparisons between the last two No. 2 NFL draft picks were cute but premature. After Trubisky’s 38.3 passer rating, in seven starts he already has posted two passer ratings lower than Wentz’s worst last year — 52.4.

“I don’t like losing, and that’s a big motivator for me,’’ Trubisky said. “You just get that sick feeling from it.’’

The epidemic has spread throughout the organization. The only cure for losing is change, which the Bears should start administering Monday morning.