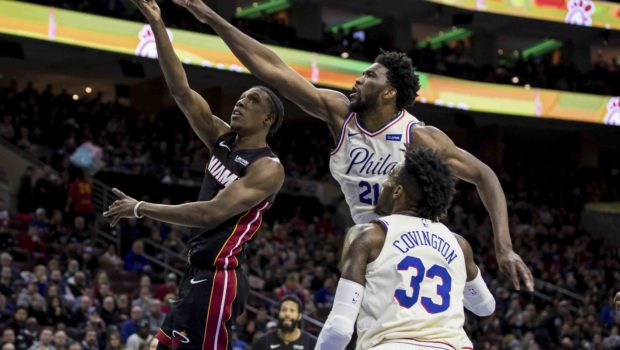 The Sixers cloaked the Wells Fargo Center in green — from the giveaway “Brotherly Love” T-shirts imprinted with the Sixers and Eagles logos — to the balloons, signage, and even the table runners on press row.

The packed house erupted in unison to belt out the “Fly, Eagles, Fly” fight song that’s as ubiquitous at Philly sporting events as “Rocky” movie clips. They broke out enough “E-A-G-L-E-S! Eagles!” chants to make the arena sound like the Linc right before kickoff.

The day kicked off at the same arena with Wing Bowl, Philly’s own competitive eating competition. Molly Schuyler gnawed her way through a record 501 chicken wings in 30 minutes to win her third Wing Bowl.

The Heat nearly harshed Philly’s mellow when they turned a 28-point hole into a four-point game on Wayne Ellington’s 3-pointer with 25 seconds left.

But the biggest win for the Sixers may be this: Embiid is set to play games on consecutive nights for the first time since he was picked No. 3 overall in the 2014 draft.

Embiid, selected to his first All-Star team, missed his first two seasons with injuries and the Sixers have been leery of pushing their 7-foot-2 center into major minutes over the last two seasons.

Embiid should be in the starting lineup tonight at Indiana.

“We’re not going to be too paranoid about how we play him,” coach Brett Brown. “There will be that in the back of our minds as the game plays out. But the bottom line is, we are going to play him to win this game and we will figure it out. There is no type of concrete minute restriction, just an awareness that I have to have and the medical staff has to have to try to get him to play in both games.”

The Sixers are eighth in the Eastern Conference playoff standings and clearly need a healthy Embiid down the stretch to crack the postseason for the first time since 2012. Brown said Embiid will play in back-to-backs because he’s been cleared to go — not to avoid the lousy optics in two weeks of playing in the Rising Stars Challenge, the Skills Challenge and the All-Star game all packed into 48 hours.

“Joel’s availability has got nothing to do with desperation or crunch time. It’s all about his health,” Brown said.

Fueled by the Super Bowl frenzy, the Sixers hit ’em low (30 points in the paint), hit ’em high (three 3s) and watched that scoreboard fly all the way to a 51-41 lead at halftime.

Dario Saric made his first five buckets, growled like a dog (Eagles fans have worn dog masks in the playoffs) and had 17 points and 10 rebounds. Ben Simmons, the rookie star who felt snubbed from the All-Star game, scored 20 points.

“I mean, if I was an All-Star, I’d be on the All-Star team,” Simmons said. “It’s a little frustrating but if you look back at how many rookies have made it, it’s not one of those things that makes or breaks your career.”