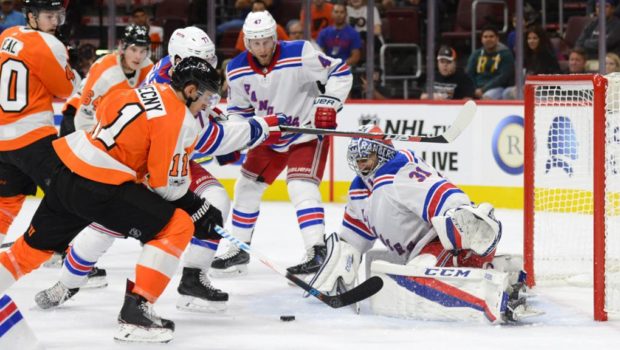 BABY FLYERS MAKE THEIR MARKS IN 4-3 OT WIN OVER RANGERS!

The youngest Flyers got revenge against the Rangers last night at the Wells.

The Broadway Blues won 3-2 on Monday night, and the Flyers took a 4-3 overtime win to improve to 2-1-3 on the preseason with two games remaining.

The young players made their marks:

Morin took a feed from Claude Giroux and wristed home his first goal of the preseason. Laughton scored on a give-and-go play with veteran linemate Michael Raffl. Lindblom scored a deflection goal (something he did frequently in Sweden) and protected the puck well. Konecny wreaked havoc in the Rangers’ zone all game and his fourth shot (ninth shot attempt of the game) proved to be to OT winner. On the play, Konecny followed up his own rebound after a pass from Giroux and, on a delayed Rangers penalty, scored from a flat angle against Ondrej Pavelec (34 saves on 38 shots).

“It felt good especially today. My head was more or less in the battles in front of the net and stuff. So it was good to get that outta the way and you know I played well today with the guys that I played with. They brought a lot of skill, so it’s easy playing with guys like that,” Konency told the Flyers’ web site.